Kanye West launched into an expletive-filled rant as he lavished praise on US President Donald Trump at an event in the Oval Office.

Wearing a Make America Great Again hat “made me feel like Superman”, he said.

West had been invited to the White House for lunch to discuss prison reform and other issues.

At the end of the 10-minute monologue, during which Mr Trump nodded in approval, the president said: “That was quite something.”

West replied: “It was from the soul. I just channelled it.”

“I love this guy right here,” West said, walking behind the desk to hug the seated president, who said: “That’s really nice.”

On the Trump hat and Hillary Clinton

During his monologue that ranged from prison reform to manufacturing, politics and the universe, West said: “They tried to scare me, my friends, to not wear this hat, but this hat, it gives me power in a way.

“You know, my dad and my mum separated, so I didn’t have a lot of male energy in my home.”

He continued: “I love Hillary, I love everyone, right. 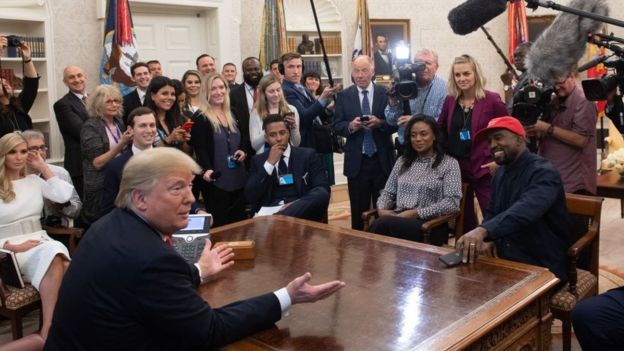 “But the campaign, I’m With Her, just didn’t make me feel as a guy that didn’t get to see my dad all the time, like a guy that could play catch with his son.”

Addressing Mr Trump, he added: “There was something about when I put this hat on it made me feel like Superman.

West denied that all black Americans were Democrats.

“People expect that if you’re black, you have to be Democrat,” he said.

“If he [President Trump] don’t look good, we don’t look good,” he said at one point, attacking the “liberals” on the Saturday Night Live show who have criticised his support for Mr Trump.

On a future presidential run

Mr Trump was asked by a journalist if West could be a future presidential candidate, and the president replied: “Could very well be.”

West told reporters: “Let’s stop worrying about the future, all we have is today. 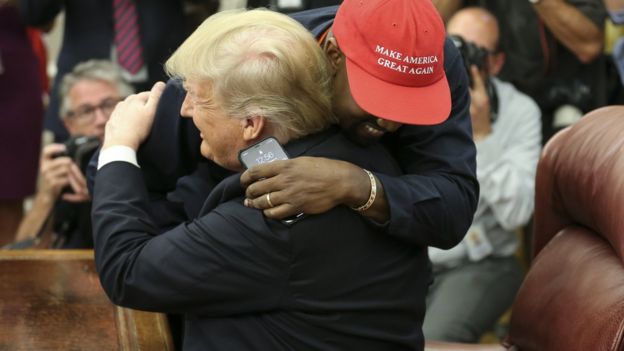 “Trump is on his hero’s journey right now.”

West told the assembled group an earlier diagnosis of bipolar disorder was incorrect, according to a neuro-psychologist he saw.

“He said that I actually wasn’t bipolar, I had sleep deprivation, which could cause dementia 10 to 20 years from now where I wouldn’t even remember my son’s name,” he said.

West has previously revealed he received treatment for bipolar disorder, and has made reference to it in his music.

“You don’t have ADD, school is boring. It is boring, it’s not as exciting as this,” he said gesturing towards his mobile phone.

At one point he typed in his mobile phone password, in full view of the assembled news cameras – a fact which did not go unnoticed by the world. 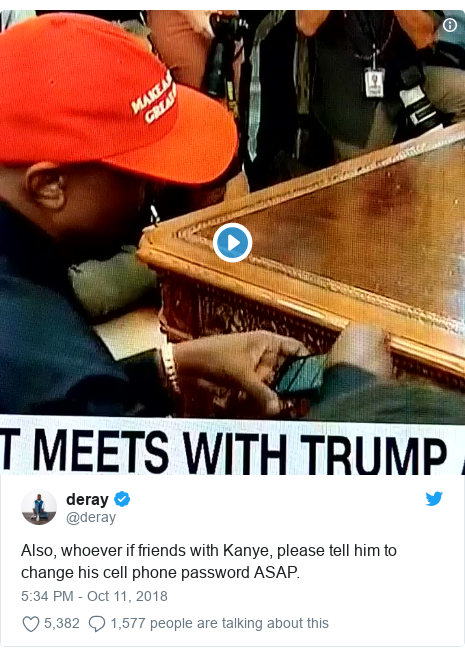 West was ostensibly at the lunch in part to discuss crime in Chicago, his hometown.

He asked Mr Trump to pardon the leader of a notorious Chicago street gang, and called on the president to build “Trump factories” in Chicago.

At one point he did disagree with Mr Trump, saying that he considers police “stop-and-frisk” to be unhelpful.

Mr Trump has called upon Chicago police to institute the practice, which allows random searches.

“I didn’t mean to put you on blast like that, bro,” West told Mr Trump.

“You stopped the war,” he told Mr Trump.

And the lunch itself…

West visited Mr Trump at his eponymous Manhattan skyscraper in 2016, a month after he won the election, but this was the rapper’s first trip to the White House.

During her first trip there, she successfully argued to have a grandmother’s prison sentence commuted by Mr Trump. 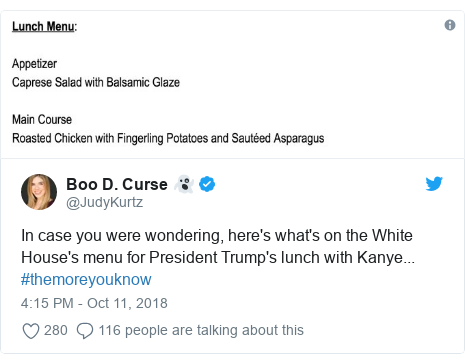