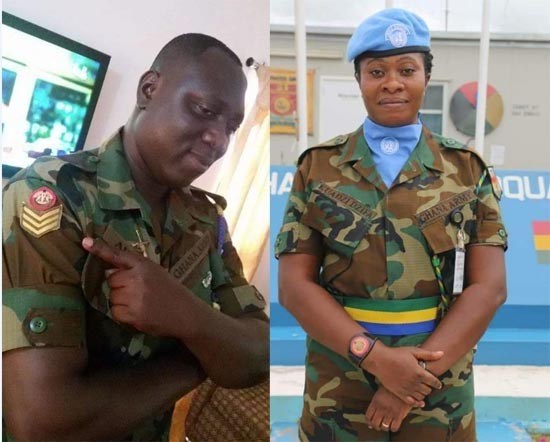 The family of a military couple that died in floods last Sunday evening has urged government to fix deplorable structures to avoid disasters in future.

“They shouldn’t delay in fixing this road…that’s is all we are saying…they should fix it”, Kingsley Eyram King Kuadzi, brother of the deceased military woman W.O II Sarah Kuadzi.

Warrant Officer Jabez Arthur, 45yrs, and his wife Warrant Oficer II Sarah Kuadzi, 40yrs, died in floods at Adjei Kojo as they drove through the rains in a military pick-up.

Rains had hidden a ditch to their left while a truck was incoming on their right along the motorway at Adjei-Kojo near Ashiaman in the Greater Accra region. After the military pick-up survived a bump on the road, the driver steered left to avoid the truck.

The vehicle fell and rolled over into the ditch which expands into a culvert that carries water down the south-western part of Tema. High-velocity flood waters overpowered the soldier couple who were in the front seat of the pick-up.

Two others, Alice and Georgina Arhin, 35 years who were in the bucket of the pick-up managed to wade through the flood to safety but a 11-month old baby who was with them has still not been found.

Their death brings to toll to 12 since an early start to Ghana’s raining season.

It is also a season of renewed criticism over the country’s poorly designed drainage system, bad roads and weak regulatory enforcement.

Brother of the deceased military woman said government must not wait for agitations or disasters before responding to calls to fix roads.

He referred to spontaneous violence at Adentan in November 2018 after uncompleted footbridges left residents at the mercy of drivers on the N1 Highway, resulting in several deaths.

Kingsley Kuadzi said government’s response by devoting monies to fix the footbridges shows “the money is there”.

The pot holes on the road at Adjei-Kojo near Ashiaman can therefore be fixed if government is committed, he indicated. “I don’t know why there are….I am even short of words”, he told the reporter.

He paid tribute to the military couple, calling her sister “the definition of a prayer warrior” and her husband, a “fantastic…wonderful gentleman.”

“If they is anyone in this world who all of us think will go to heaven, she is the one. She and her husband,” he eulogized.

He said his brother-in-law had promised him a smart TV after he returns from a peace-keeping operation in Israel.

The relative, a counselling psychologist, said the family accepts the death as God’s sovereignty at play.

The couple left behind a 12-year old son.

Defence Minister Domnic Nitiwul who visted the family described the floods as a national embarrassment. But he has assured the family, government is committed to fixing the annual flood problem.

”Whatever correction that we need to do so that nobody gets this type of problem, we will do it,” he told the family.