As he commemorates 38th anniversary of the June 4th Uprising, a popular and violent uprising in Ghana in 1979 that arose out of a combination of corruption, bad governance, lack of discipline in the army and frustrations in the army and among the general public, the main architect believes it is the second independence of the country.

During a courtesy call on the Wa Naa Fuseini Seidu Pelpuo IV at his palace on Saturday June 3, 2017 ahead of the commemoration, Former President Jerry John Rawlings underscored the significance of the event in the history of the country

He said “we all know how important June 4th is to us. It is pretty much like a second independence to liberate ourselves from ignorance of the past and from some of those oppressive tendencies. I am so truly happy to find the Wa Naa, our dear paramount chief and most of you in good health. I sincerely hope you continue this way to give us the guidance and leadership we need”, he said.

He expressed worry over recent tensions within the Wa municipality over a parcel of land and commended the chiefs and security agencies for containing the situation and ensuring it did not degenerate into violence.

The former President is in the Upper West Region to commemorate the 38th Anniversary of the June 4th uprising under the theme “Restoring the Values of Probity, Accountability and Truth in Contemporary Governance”

He was met on arrival by members of the National Democratic Congress (NDC) in the Upper West Region, Cadres and former Ministers as well as District Chief Executives from the region.

Mr Rawlings will address supporters of the NDC at the Tindamba Primary School on Sunday afternoon. 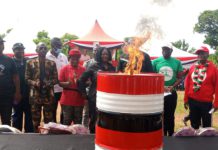