However, this rate has been measured without the revised economic rebasing figures.

According to the Ghana Statistical Services, this rate of inflation for September 2018 is the percentage change in the Consumer Price Index over the twelve-month period, from September 2017 to September 2018.

The price drivers for September 2018 were mainly due to a fall in the rates of inflation for the Education group (1.0%), Clothing and Footwear group (0.9%) among others.

“In any month, the combinations of factors such as government policy, season, exchange rate, interest rate, etc. may influence the rate of inflation. 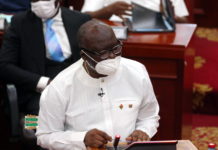