Hiplife artiste MzBel who denounced Christianity years ago has vowed never to return to the religion again.

The songstress known in real life as Nana Akua Amoah Belinda speaking on ‘Celebrity Ride With Zionfelix’ disclosed that most Christians do not practice what they preach and she has a problem with that act. According to her, she finds comfort at Judaism and will not return to the religion, which is based on the life and teachings of Jesus Christ.

She further described Christianity as idol-worshipping because its members kneel and pray to a picture they believe represents Jesus Christ, the Son of God. Mzbel refuted reports that she once said that she doesn’t believe in God. The mother of one explained that she believes in God but not Jesus Christ who has been described as the Son of God.

The “16 Years” singer also debunked claims that she stopped being a Christian because of her woes at the International Central Gospel Church.

“My decision to stop Christianity was not based on my encounter at ICGC but when I quit the church, I sat down to think about why the people in the church are not practicing what they preach.”

When Zionfelix, host of the show quizzed her if she will return to Christianity again, Mzbel replied, “No, I see it as Idol-worshipping”. 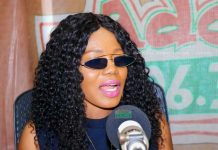 Popular songstress reveals sacrifices she made for NDC