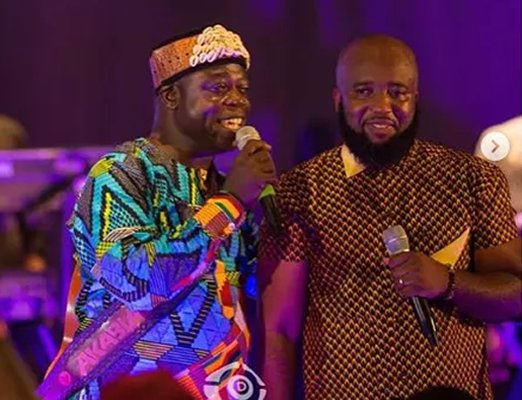 The admiration that veteran musician, Aka Blay has for his younger colleague, Trigmatic, runs very deep, to the extent that he wishes the ‘My Life’ artiste were his biological son.

According to Aka Blay, Trigmatic is an amazing musician and very well organised.

“Trigmatic knows that I love him with a passion. That young guy is too talented and composed. I have dealt with him a couple of times and he has never disappointed me.

“He takes anything I tell him seriously and I wish he were my biological son,” he told Graphic Showbiz.

According to him, he has never seen a young musician who knows what he is about like Trigmatic.

“Apart from his good human relations, his music is also very great. His stage performance is fantastic and I want to use this opportunity to big him up for how far he has come,” he said.

Akablay said if he had money, he would not hesitate to finance Trigmatic’s music career because he believes in him.

“I feel bad that I don’t have that much money to help a very good musician like Trigmatic who I adore so much. I know he is involved in other businesses which are doing very well and I am so proud of him,” he said.

When Showbiz got in touch with Trigmatic, he said he was honoured to hear such great words from a veteran musician who has paid his dues in the music business.

In June, Akablay will celebrate 30 years in the music industry and said, “I have definitely paid my dues as a musician and look forward to more fruitful years.”

He disclosed that he has invited other musicians like Kofi Kinaata, Obrafour, Trigmatic, Cabum, Wanlov the Kubolor and a host of other musicians to join him in the celebration.

Akablay has traveled around the world and played in different countries such as Germany, Denmark, Norway, France, Sweden and Italy.

For his exploits on the guitar, he was adjudged the Vodafone Ghana Music Awards Best Instrumentalist in 2009.

He won the Best Guitar Player trophy at the 2014 Best Instrumentalists of Africa Festival in Cotonou, Benin.