A young Nigerian girl has been arrested by the police for allegedly possessing human heads.

The suspect, Chidinma Ihuoma from Mbirichi, Igbo state was  apprehended by Nigerian security operatives while transporting the heads to another town.

In the video, the girl is seen confessing to the crime, saying they killed the two people this morning!

According to her, the victims pleaded for mercy before they were killed! 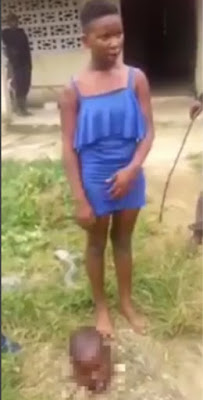 One of the security men can be heard saying,  I wanted to fire the other ones but he (his colleague) say make i no fire!
At the time of writing this report, her partners in crime are at large!
Watch full video below