The president of the Ghana, Nana Akufo-Addo, has been spotted in the latest video showing his dancing moves during the inaugural dinner held in honour of Liberian President George Weah who was sworn into office on 23rd of January, 2018.
In the eye-pleasing video, the President was seen on the dance floor showing his dancing skills in a way akin to ‘slow motion’.
Watch this: VIDEO: Prez Akufo-Addo & First Lady dance at Ghana Unity Ball

His Excellency President Akufo-Addo was dancing with the Ghana Foreign Affairs Minister, Hon. Shirley Ayorkor Botchway who was also well on spot to kill the beat.
See also: VIDEO: Prez Akufo-Addo & First Lady dance at Ghana Unity Ball
Also on the dance floor was the lovely couple-of-the-moment, President Weah and his wife, together with the newly appointed Liberian Speaker of Parliament, also with his wife.
President Nana Addo Dankwa-Akufo Addo on several occasions, has proved that he really loves to dance and knows how to do it.
He was once seen doing his moves during the Musicians Union of Ghana (MUSIGA) Grand Ball which was held last year on December 29, 2017.
Aside the President, other Ghanaian public figures who made it to Liberia to honour President Weah include Jackie Appiah, Van Vicker, Confidence Haugen, Barimah Sydney and many others. 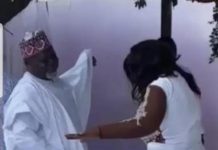