Former President John Mahama has urged the opposition NDC to desist from attacking members who have declared their intention to contest the party’s flagbearer primaries.
He said although it is premature for him to declare his intention over the race, it is not wrong for others to declare.
“I know there are several of my colleagues who have declared an intention to run. They are all party members and they are eligible to stand.
“Let me caution: after the flag bearer contest, whoever wins, all of us will have to rally round to support that person. And, so, please let us not go personal, let us not insult each other because all of us belong to the same NDC family, and, so, if anybody has declared to stand it is his right to do so. Don’t insult him because, at the end of the process, all of us need to come together to support whoever wins as the flagbearer.
“I have no problem with any of my colleagues. Spio was my minister, I worked as his deputy minister and then he became my colleague …and then when I was in government he worked as my minister of state, I can’t have any problem with Spio. I can’t have any problem with Joshua.
Joshua was my colleague, we went to parliament the same year and we were in parliament together.
When he became Vice-Chancellor of UPSA, he invited me for so many programmes in UPSA, so today I can’t have a problem with Joshua. Sylvester was in parliament with me; we were colleagues in parliament, he worked at our NHIS CEO.
After that, he came as a presidential staffer at the Flagstaff House. I hope nobody takes offense that I didn’t mention some other people, Atubiga is my favorite presidential candidate,” he told NDC supporters in Cape Coast Sunday.
Watch full video below 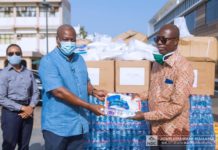 Covid-19 Fight: Why I’d rather donate towards provision of PPEs – John Mahama