Acting National Chairman of the ruling New Patriotic Party (NPP), Freddie Blay has asked all public sector workers who have been sacked by the New Patriotic Party (PPP) adminstration to head to court if they believe it’s unlawful.
According to him, the NPP had to sack some public sector workers, particularly those who were employed by the John Mahama administration after December 7.
“If any public sector worker has been sent home or has been asked to go home, they should go to court if they believe they being asked to go home is unlawful,” he said.
President Nana Addo Dankwa Akufo-Addo has in the last eight months been accused of sacking about 13,000 public sector workers.
Some of the dismissed public servants claim they were shown the exit in fulfillment of the NPP government’s policy to lay off workers suspected to be sympathizers of the NDC.
Senior members of the governing party are on record to have openly threatened the replacement of suspected NDC public servants with their (NPP) supporters.
Leading members of the NPP including Minister of Energy, Boakye Agyarko; Assin Central Member of Parliament, Kennedy Ohene Agyapong; Chief of Staff, Mrs Akosua Frema Opare-Osei among others are alleged to be advising President Akufo-Addo to replace all public sector workers suspected of being sympathizers of the NDC with members of the NPP.
Freddie Blay speaking on Asempa FM’s Ekosii Sen programme Wednesday, condemned the Mahama-led government’s last-minute appointments, contracts and recruitment policy.
Describing the move by the NDC government as arrogant, Freddie Blay noted that it was important that the NPP government has been able to reverse the decisions of the Mahama-led government.
He therefore called on all dismissed public servants to head to court if they believe government’s move was illegal.
Listen to Freddie Blay 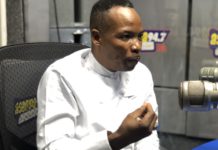