Residents of Chiana-Paga in the Upper East Region are appealing to President Akufo-Addo to pardon former National Coordinator of the defunct Ghana Youth Employment and Entrepreneurial Development Agency (GYEEDA), Abuga Pele.
He was handed a 6-year sentence by an Accra High court on Friday, after he was convicted for willfully causing financial loss to the state.
Mr. Abuga Pele superintended the awarding of GYEEDA contracts in the erstwhile John Mahama-led government that led to the loss of some state monies.

The former Parliamentarian was convicted alongside businessman Philip Assibit, who was found guilty of putting in false claims that made the nation lose more than GH¢4 million Ghana cedis.
Mr. Abuga-Pele is the former Member of Parliament for Chiana-Paga and has attracted the sentiments of the natives.
Some residents who spoke to Joy News said they are saddened by the fate that has befallen their former legislator.
“…we are very sad by what has happened because Pele is not only our former MP but he is also the father of the constituency,” one aggrieved resident told Joy News correspondent Rafiq Salam.
“…we are appealing to His Excellency Nana Akufo-Addo, they should put politics aside and help Abuga Pele to come out,” another man said. 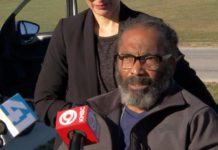