Ghana Premier League side, Hearts of Oak, have confirmed the signing of three new players ahead of the new 2022/23 football season.

The Phobian club, that will be representing the country in the CAF Confederations Cup, is beefing up the side.

The FA Cup champions have confirmed the signing of Goalkeeper Eric Ofori Antwi.

The former Asante Kotoko shot-stopper joins the side on a three-year deal as a free agent after leaving Legon Cities.

The bulky joins Samuel Boadu’s side on a two-year deal from Fauvre FC.

Kaaba was one of the standout players for Cameroonian side Fauve Azur this season, scoring seven goals and providing five assists after only 11 matches.

He bagged five goals in his last five matches and was adjudged his club’s player of the month for April.

Meanwhile, Zakari Yakubu, has also joined Hearts of Oak on a four-year deal.

The enterprising defender joined the side on a four-year deal from All Blacks.

He becomes the third signing of the club following the acquisition of Eric Ofori Antwi and Cameroonian forward Junior Kaaba who both joined the club on Wednesday.

Yakubu was one of the standout players for All Blacks last season, making a handful of appearances. 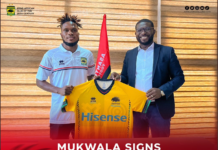