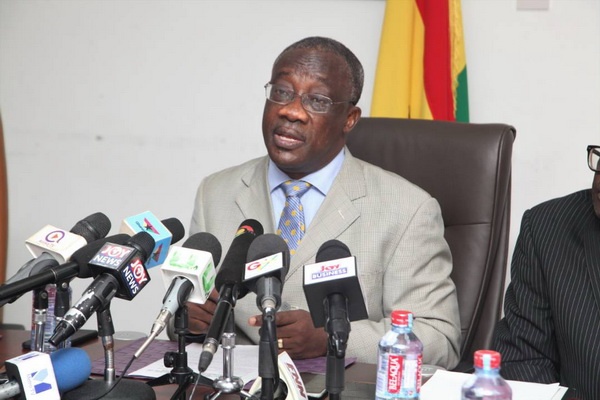 The Commissioner-General of the Ghana Revenue Authority (GRA), Mr. Emmanuel Kofi Nti, has expressed grave concern over the politicisation of tax issues in the country. According to the GRA boss, the issue, if not properly addressed, would negatively affect the development of the country

He has, therefore, charged Ghanaians to embrace any good policy which has the tendency to improve the development drive of the country, irrespective of the political party or government that introduces it.

He made the observation at a two-day training workshop organised for members of the Private Newspapers Publishers Association of Ghana (PRINPAG), here in the Eastern Regional capital, Koforidua.

According to Mr. Nti, his office recognises the importance the media plays in informing, educating and entertaining Ghanaians, as well as serving as gate keepers to the public space, and sets the agenda for national discourse.

He regretted that the attitude of the large number of income earners in the country towards their tax obligations leaves much to be desired, especially operators in the informal sector, and that the theme for the training workshop was most appropriate.

“GRA has and continues to come up with various strategies, which include simplifying process and procedures, intensified education, and improved service delivery to ensure voluntary compliance,” he added.

He mentioned the introduction and enforcement of the Tax Identification Number (TIN), affixing of excise tax stamp on specified excisable products, paperless clearance at the ports, and cargo tracking note as some of the strategies and innovations.

Mr. Nti stressed that even though the GRA wants to operate in a friendly environment, it would not hesitate to prosecute tax defaulters in order to send a signal that the GRA can bark and bite, hence, called on recalcitrant taxpayers to amend their ways.

Though he admitted that the GRA has more work to do in terms of education, it is also incumbent on all income earners to contribute their quota to nation-building.

Essence of the training and benefit to the state

Touching on the importance of the training workshop, the President of PRINPAG, Mr. Edwin Arthur, said a country whose residents employ all manner of strategies, including tax evasion and avoidance, to escape their tax obligation, risks having its development negatively affected.

He continued that the nation would lack the needed resources to pursue its development and nation-building agenda, if its residents are not encouraged to pay taxes.

For this reason, the PRINPAG President underscored that it is imperative for his outfit to effectively partner the tax authority to help raise revenue through taxes, and help change the negative practices.

Mr. Arthur is of the conviction that potential taxpayers would be convinced to pay and honour their respective tax obligations voluntarily if the right information on payment of taxes is well communicated.

He disclosed that the responsibilities of the media in dissemination of relevant, credible and well researched information to rally people for development cannot be underestimated and compromised.

Reminding his colleagues, the PRINPAG President echoed that if the media in Ghana wanted to be relevant and redeem the past glory as a critical partner in development, there was the need for specialisation.

Notwithstanding, he charged media practitioners to blend knowledge with a high sense of professionalism and discipline, upholding and applying the ethics of the profession.

According to him, the media is an indispensable partner in the fight against corruption, oppression and marginalisation in our various societies, and as well credible partners in development and nation-building.

But, to him, the manner in which some media practitioners carried themselves and their activities in recent times is nothing to write home about, which subsequently discourages others from patronising the work of the media.

Why prospective taxpayers are not paying taxes

The PRINPAG President continued that there is wild spread of perceived misapplication and mismanagement of public revenue, an act that has undermined voluntary compliance, particularly due to the flamboyant lifestyle of some politicians.

To him, there must be a conscious effort for the Authority to create an enabling platform to address and answer how monies generated from taxes are disbursed, to erase the impression that, there are no benefits in paying taxes.

He charged the Authority to pay attention and engage in extensive consultations with stakeholders, with the view to taking onboard the concerns of taxpayers and prospective taxpayers in the formation of tax policies.

“This is because the frequent manner in which tax laws have had to be amended or repealed does not auger well for us as a country, and one such example is the recent stoppage of the payment of vehicle luxury tax,” he stressed.

Mr. Arthur outlined many factors such as lack of logistics in the form of retention, and insufficient imprest to run the administration of the various districts for revenue mobilisation that have negatively affected revenue mobilisation, and for that matter the GRA failing to meet its revenue target.

Apart from the aforementioned factors, Mr. Arthur disclosed that there is lack of motivation among staff of the GRA, a situation, he noted, if not well addressed, would negatively affect revenue generation.