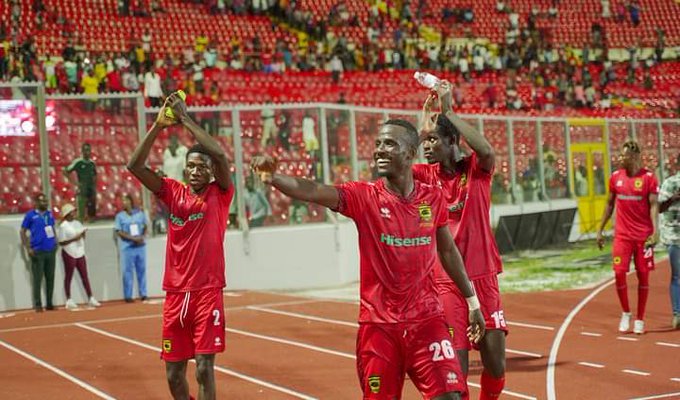 The matchday four of the 2021/22 Ghana Premier League has ended at the various stadia with some shocking results.

Asante Kotoko made it four out of four under Prosper Nartey Ogum while rivals, Hearts of Oak are still in search for the first win of the campaign.

Below is the full wrap up:

Kumasi Asante Kotoko made it four wins out of four games after comfortably brushing aside a flat Eleven Wonders side at the Baba Yara Sports stadium on Saturday.

Samuel Boateng gave the Porcupines Warriors the lead in the first half after latching onto a through ball from Salifu Mudasiru before drilling a low effort past Abdulai Ibrahim.

The Reds sealed the victory after Isaac Oppong scored from an acute angle to increase his season tally to three so far.

The result extends Kotoko’s lead at the top to three points as they remain the only side with a 100% record in the Ghana Premier League.

Newly promoted side, Accra Lions picked up their first three points of the season in a home game against Bechem United.

The Accra-based side raced into a two-goal lead in the first half thanks to Christopher Acheampong and Rauf Salifu.

Former Kotoko forward Augustine Okrah pulled one goal back for Bechem but it proved to be a consolation.

The win sends Accra Lions into the top 10 of the standings as Bechem remain 4th.

On Friday, King Faisal lost their first game of the season after Berekum Chelsea beat them 1-0 thanks to a goal from Paul Atta Agyei.

At the Obuasi Len Clay Stadium, Hearts of Oak were hammered by 2-0 to pile more misery on Samuel Boadu and his technical team.

Yaw Annor broke the deadlock on the 53rd minute for the Miners before Abdul Salam sealed the win with a spot-kick.

At the Red Bull Arena at Sogakope, WAFA hosted Legon Cities. Lawerence Agyekum scored on the 5th minute for the home.

Before the recess, Justus Torsutey doubled the lead for the home side. With six minutes to end the game, Asamoah Boateng-Afriyie made it 2-2 as Maxwell Konadu and his charges picked a point.

Isahaku made it 3-0 on the 27th minute but before halftime, Maxwell Quaye scored for the home side to end the first half 3-1.

Just after the break, Olympics started well and began to threaten their opponent.

On the 63rd minute, Maxwell Quaye made it 3-2 before Samuel Armah rose to the occasion to score a late goal on the 84th minute to end the game 3-3.

Medeama SC v Karela United tie was called off due to heavy downpour.