Government has secured funding from the Saudi Arabian government for the construction of 20 technical art schools in all the regions of the country.
Professor Kwesi Yankah, Minister of State in Charge of Tertiary Education, said this at the durbar of the chiefs and people of Agona Duakwa held to climax their annual Akwambo festival.
The Minister said each region would get two of the 20 technical schools with modern equipment, adding that the establishment of the technical institutions would commence before the end of 2017.

Prof Yankah said one of the technical schools would be established at Agona Duakwa in the Agona East District of the Central Region.
The Minister said it would offer training to students in carpentry, masonry, electricals, Information and Communication Technology amongst others.
Prof Yankah said it is the duty of all stakeholders to help provide useful skills training to the youth to help halt migration to towns and cities.
He said plans have been completed for the rehabilitation of the first free national boys’ school established by Nana Kojo Amoakwa, chief of Agona Duakwa, which has been converted into a Junior High School (JHS).
The Minister said after the completion, the ADA JHS would be named after the first Duakwa chief, a great visionary, who died in the 60s.
Mr Dennis Armah-Frempong, Agona East District Chief Executive, said the Assembly has made the budgetary allocation in the 2018 composite budget to construct and rehabilitate dilapidated basic school structures.
He said the assembly has selected cocoa and palm oil for the One District One Factory programme and urged farmers in the area to invest in these cash crops.
The DCE said thousands of bags of fertilizers and varieties of maize seeds have been supplied to the farmers at the subsidized prices under the Planting Food for and Jobs policy.
He called on the farmers to invest in Planting for Investment initiative which is the additional programme to under the One District One Factory policy. 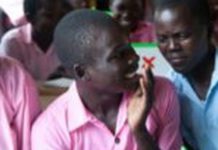