According to a statement from the post’s top spokesperson, Lt. Col. Andy Thaggard, Pvt. Abdul N. Latifu, 21, of Bronx, New York City, died from injuries sustained in the attack.

Both soldiers were students in advanced individual training, the second leg of enlisted initial entry training.

The alleged perpetrator has not yet been identified by officials.

The attacker used an Army-issued entrenching tool — a small steel folding shovel — in the assault, a source with knowledge of the incident told Army Times, requesting anonymity in order to share information from the preliminary investigation, which has not yet been released to the public.

Thaggard added that the attack is “under investigation.”

It’s not clear why the attack occurred, but the service’s Criminal Investigation Division is investigating the killing. According to a statement sent to Army Times Wednesday evening, there is no indication the incident was a hate crime.

Counsellors and chaplains are available at Fort Rucker to provide support for those who need it. 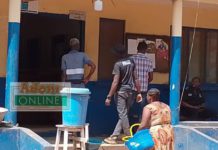 Man dies after allegedly being hit in the head with stick