Former President, John Mahama has moved out of the government bungalow he occupied at Cantonments in Accra.

A photo of the former President’s daughter, Farida standing infront of what was described as a “carton box”, with the caption; “Moving takes a lot of packing and labelling. Farida’s carton box caught my eye” posted on Instagram, suggested John Mahama was relocating.

The Greater Accra Regional organizer of the National Democratic Congress (NDC), Anthony Nukpenu had earlier confirmed that the President had moved from his official residence.

He told Citi News the former President was now living in his private residence.

“Today [Saturday] was the final day for him and his family to vacate that premises and that was done by close of day and it shows he is not the kind of person that lacks a place of abode. He has finally packed out of the government bungalow and his now living at his private residence.”

“For a person of his nomenclature he has several personal buildings that he occupies but for now I know he is living around the Kawukudi enclave which is around the Gold House and that is where he will be residing for the moment until further notice,” Mr Nukpenu added. 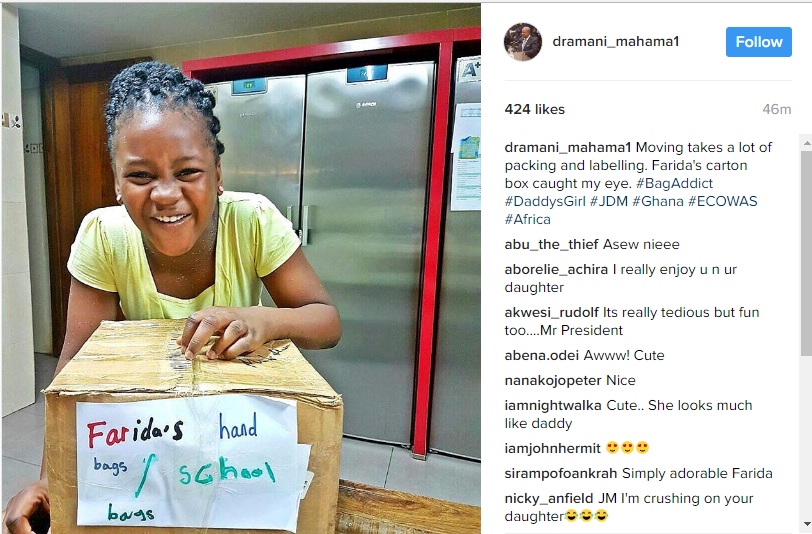 Mahama, through a letter signed by the former Chief of Staff, Julius Debrah, dated 19th December 2016, informed the new government, New Patriotic Party (NPP) that he wanted to keep the Presidential residence as his retirement home, and made a request for some adjoining properties to be given to him as his office.

The request, which was contrary to the approved recommendations set by the Prof. Dora Francisca Edu-Buandoh committee on Emoluments and Conditions of Service for Article 71 office holders, created a public uproar, with many Ghanaians accusing the President of blatantly trying to acquire more than what has been approved for him by the state.

Mahama who recently withdrew an earlier request to keep the property as his retirement home left the premises before the close of day, Saturday, January 14, 2017.

‘Residence approved as my retirement package’

The President in a subsequent statement, said his decision to maintain the state residence he occupied while in office, was approved by the new government led by Nana Akufo-Addo as well as Parliament.

But President Nana Akufo-Addo’s side of the transition team in a rebuttal, said the government is yet to approve former President’s request to keep his the property, contrary to Mr. Mahama’s statement.

The spokesperson to Akufo-Addo’s side of the transition team, Kojo Oppong-Nkrumah, in a Citi News interview, said there had been no approval yet for the former president to keep the house.

President Mahama subsequently in a letter addressed to President Akufo-Addo and copied to the Asantehene, Otumfuo Osei Tutu II on January 10, 2017 withdrew his request to keep the bungalow as his retirement home and another property as his office.

He did not give further explanation for his latest decision but said, “I do recognize that these are facilities that are conventionally extended to Presidents that leave office and I am also mindful of the approval by the Parliament of the Republic of Ghana on Wednesday, 4th January, 2017 at its Twenty-Second Sitting of the Third Meeting of the Fourth Session.”

“You will recall, Mr. President, that contrary to the erroneous impression created by some persons in Government and the interpretation given to the formal letter submitted on my behalf by Julius Debrah, this follow-up to an agreement we had on my choice of accommodation and office. I had never requested to purchase the property,” Mahama said.