And yes, one of the sons of former President John Agyekum Kufuor, Mr Edward Agyekum Kufuor, has turned out to be a successful businessman. But his other job is what has raised many eyebrows.

As unconventional as it may appear, the 45-year-old handsome buddy, Eddy, as he is usually called, is now a fledgling actor, who appears to be fast acquiring the feathers necessary for a supersonic flight to the zenith of the Ghanaian and, indeed, African and world movie class.

Incidentally, Adams’ Apples is not the first and/or only movie in which Eddy has acted. He has featured in Double, Wrong Target, Tears of A Smile, Swag, No Pain No Gain, Soja Bar and The Pledge.

He has also starred in some television series – Living with Trisha and yet to be released Daughters of Eve Season One.

For his fine acting skills, the President’s son has a Ghana Movie Award Nomination on his curriculum vitae (CV) for Best Supporting Act (Male). His love for the screen also got him a role in a television commercial for Melcom.

The Director of Adams’ Apples and Managing Director of Sparrow Productions, Shirley Frimpong Manso, describes Eddy as a growing actor who is disciplined and business-minded, “although I do not believe that he lives off acting”.

“He has a passion for acting and it shows in his work in Adams’ Apples. Obviously his status as the President’s son does not get in his way as an actor and that is good,” Ms Frimpong Manso noted.

Eddy plays Richard Blankson, the ‘Vice President’ of the Republic of Ghana in Adams’ Apples. In the series, Mr Blankson is a good man who is lacking love and affection in his relationship so when his ‘old flame’ Jennifer Adams, played by Joselyn Dumas, calls upon him for help, he goes all out seeking friendship and then an affair at the expense of Jennifer’s marriage, as well as his campaign to be the next President of Ghana.

His wife, Cecilia Blankson, played by Nana Ama MacBrown, used to be Jennifer’s lecturer from school and doesn’t quite approve of the fact that Jennifer has come back into the picture under the guise of being Richard’s campaign strategist.

She gives her a strong warning but as events unfold it will soon be obvious that none of these three people are playing by the books.

Eddy, the fourth child and second son of former President John Agyekum Kufuor and former First Lady Theresa Aba Kufuor’s five children, tells The Mirror, “I have always been passionate about and interested in acting.”

“In fact, I have always liked theatre, singing and performing arts in general. I have done some stage drama and other theatre performances in the USA (New Orleans, Louisiana).”

In all things, the smooth actor believes that education is key and for most part of his life, he has been pursuing knowledge in institutions home and abroad.

He started school at the Christ the King International School in Accra and continued at Achimota Senior High School for his General Certificate of Education (GCE) Ordinary Level and later enrolled at the Labone Secondary School for the Sixth Form programme.

He holds a professional certificate in programming for business applications and has also completed the first year of his Master of Business Administration (MBA) course at the University of New Orleans, New Orleans, Louisiana (U.S.A.).

The February 1968-born is, indeed, a solid and attractive man who stands at five feet, 10 inches and weighs 85kg but unfortunately for the ladies, he is already taken.

The 45-year-old father and grandfather is an avid lawn tennis player. He also enjoys polo/horse-riding, swimming, fishing, nature-walks `and site-seeing. 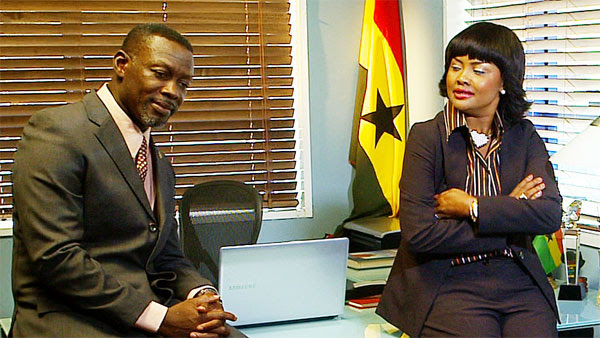