The bodies of 87 African migrants have washed ashore in the Libyan city of Zawiya, in the latest drowning tragedy to hit the region.

It is believed they were trying to cross the Mediterranean to Italy.

Migrant deaths have risen to record levels along this smuggling route in recent months.

A torn rubber boat was found nearby, and it is feared more bodies may surface as such vessels usually carry up to 120 people.

Some of those who died are believed to be children.

A spokesman for the Libyan Red Crescent – the country’s Red Cross – said the bodies were retrieved by its workers.

Mohammed al-Misrati said local authorities would take the bodies to a cemetery for unidentified people in the Libyan capital, Tripoli.

The Red Crescent posted photographs on its Twitter account showing dozens of body bags along the shore. 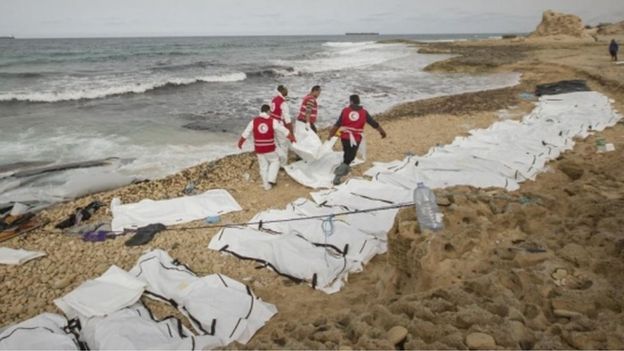 The UN’s migration agency, the International Organisation for Migration, said the boat that sank had left Libya on Saturday with 110 people on board.

At least 5,000 people drowned last year while trying to reach Europe via the Mediterranean.

Libyan coast guard spokesman Ayoub Gassim said over 500 migrants were rescued at sea on Friday and Saturday near the city of Sabratha, to the west of Zawiya.

The boats were between five and seven miles (8-11km) from the coast of Libya.

Mr Gassim said the smugglers were now using larger rubber boats in order to pack more migrants in, some carrying up to 180 people.

The boats are weak, and loading them so heavily dramatically raises the risk of sinking.

“We are seeing the new boats, which are not equipped with anything, but they carry more people,” he said.

“This is going to be even more disastrous to the migrants.”