The Asantehene Otumfuo Osei Tutu II said Ghana has managed to exploit the importance of Traditional Authority together with Political leaders for a strong co-existence.

He revealed that since his assumption on the Golden Stool, he realised that the government of Ghana alone could not address the challenges facing the country and that there was a need for Traditional Authorities, stakeholders and Civil Societies to partner government to succeed.

The Asantehene made the remarks when he addressed members of the United Nations at the 73rd General Assembly to celebrate the 20th Anniversary of the adoption and declaration of Culture of Peace in the United States.

The anniversary was on the theme: “20th Anniversary of Culture of Peace: Empowering and Transforming Humanity.”

He refuted the perception that inter-tribal differences were the reason for the failure of Africans.

The Asantehene said: “through my foundation, ‘the Otumfuo Foundation,’ I have managed to support 600,000 students with scholarship both at the Pre Tertiary and Tertiary Education, apart from the provision of Healthcare, Water and Sanitation the foundation is striving to achieve.”

He recalled his contribution in solving Dagbon’s 17-year-old conflict with other eminent Chiefs which was threatening the Peace and Security of the Country.

In his role on the political front in Ghana, the Otumfuo revealed how he made all political leaders sign a bond to exhibit a good conduct before, during and after the election period within his Kingdom, adding that after the Presidential and Parliamentary Elections; he called on the losing party to accept the result in good fate for peace and stability in the country.

He noted that for the UN to achieve the Sustainable Development Goals, members needed to sustain peace, respectful dialogue, allow free flow and sharing of Knowledge, understanding equality between women and men among other factors.

“No Country can afford to live in isolation in this globalised world, therefore, countries need to work in partnership to make the world a better place to live,” he added.

On behalf of the Secretary General, Maria Luiza Ribeiro Viotti, Chef de Cabinet said, peace was at the heart of the United Nations Charter and all that it does.

She said the concept of a culture of peace provided an intellectual frame and political impulse for action and it was a concept that embodied the yearning to make peace a way of life.

Ms Viotti said it was grounded in the understanding that peace was fragile and that the pursuit of peace must be a constant process, adding, “Peace is something we must work hard to secure every day and everywhere.

She said over the decades, that idea expanded from traditional notions of security to accommodate new challenges to forging peaceful societies.

These she said included increased social injustice, the exponential speed of communications, violations of human rights, the normalisation of hate speech, the climate crisis, the threat of terrorism, and the potentially disruptive influence of artificial intelligence.

“At the same time, we must remain determined to address age-old challenges to peace, including; violence against women. Indeed, whether it is brutal crimes in one part of the world or violent extremism in another, quite often one of the strongest common denominators is hostility towards women.

She said, civilians, paid the highest price of conflict, which also fueled fragmentation and allowed impunity to thrive. 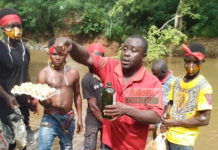 Check out Ghana’s female running mates since the beginning of the...