Nigerian MPs have voted to give The Gambia’s President Yahya Jammeh asylum if he accepts his defeat in elections and gives up power.

The “clock is ticking fast” and efforts to end the crisis in The Gambia should intensify, the lawmakers added.

Nigeria’s President Muhammadu Buhari is due to visit The Gambia on Friday in a bid to broker a deal with Mr Jammeh.

His office has not yet commented on the vote by the lower chamber, the House of Representatives.

Property developer Adama Barrow, the winner of The Gambia’s election, insists he will become president on 19 January when Mr Jammeh’s term expires.

However, Mr Jammeh says he will remain in office until the Supreme Court rules on his bid to annul the 1 December poll.

He alleges that the election was marred by irregularities and he has demanded a new poll.

Nigeria’s House of Representatives approved a motion, saying Mr Buhari should offer Mr Jammeh a “safe haven” in Nigeria to try to end the standoff peacefully.

This would be better than sending troops to remove Mr Jammeh from power, and seeing Gambians flee to neighbouring states, Speaker Yakubu Dogara said. 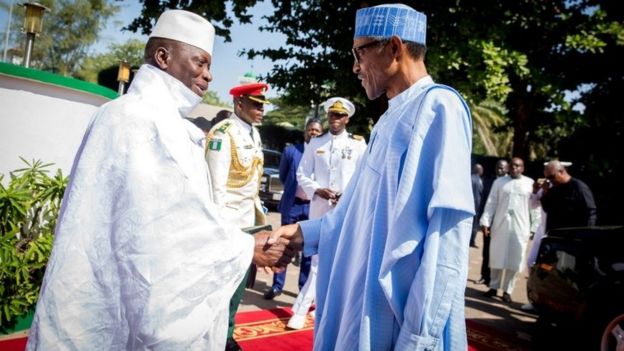 Mr Jammeh seized power in a bloodless coup in 1994 and has been accused of human rights abuses.

He has regularly held elections, and his defeat in December came as a shock.

He initially accepted the result, but rejected it after the election commission changed some of the results.

The regional body, the Economic of West Africa States (Ecowas), has warned it will send troops to The Gambia if its mediation efforts, led by Mr Buhari, fail to persuade Mr Jammeh to quit.

Mr Buhari’s visit to The Gambia on Friday would be his second to the small country since the crisis broke out.