According to Minority leader, Haruna Iddrisu who addressed the news conference said the decision by the Attorney General’s Department to free the suspects amounts to a “total disrespect to the judiciary.

The eight members of the NPP militia group, Delta Force, standing trial for assaulting a judge and disrupting court processes were discharged Wednesday following the prosecution’s inability to provide evidence.

The Kumasi Circuit Court presided over by Justice Patricia Amponsah discharged the suspects, Wednesday, for lack of evidence.

But Haruna Iddrisu expressed shock at the shoddy work done by the Attorney Generals Department.

He said the decision by prosecution to enter a nolle prosequi in the infamous Delta Force court invasion scandal is bias, and capricious.

Haruna Iddrisu indicated that, the prosecution could have made use of video footage that has been circulating on social media following the attack.

The Minority leader noted that, given the development,  it was obvious from the Court’s decision, the Attorney-General, Gloria Akuffo and the President Akufo-Addo were not interested in the continuation of the matter.

Haruna Iddrisu is, therefore, calling for a reversal of the “cancerous discretion” and subsequent arrest of the eight accused persons.

PRESS CONFERENCE BY THE MINORITY CAUCUS OF PARLIAMENT READ BY MINORITY LEADER HON. HARUNA IDDRISU ON THE CANCEROUS EXERCISE OF DISCRETION BY THE ATTORNEY-GENERAL OF GHANA IN THE DELTA FORCE SAGA

The attention of the Minority Caucus in Parliament has been drawn to a very bizarre legal development in the country, which at best can be described as a slap in the face of the administration of justice, the rule of law and the judiciary in particular in this Country. I am referring to the decision of the Hon. Attorney-General to curtail the trial of the infamous Delta Force members who stormed a session of the Kumasi Circuit Court and aided the escape of 13 of their colleagues who were standing trial, by entering a Nolle Prosequi – “Refuse to Pursue.”

We refer to the action by the Hon. Attorney-General as bizarre because this is a Government that claims to be adherents of the Rule of Law.

This is a travesty of justice and a lack of respect for the Judiciary.

The Executive has a duty to uphold the tenets of the Constitution and in particular demonstrate in conduct and action its respect for the other arms of Government, particularly the Judiciary. Justice delivery will suffer a downward spiral with this uninformed action.

The decision by the Hon. Attorney-General is a confirmation of the claim by leading Members of the NPP at the time of the lawless action by the lawless Delta Forces that the culprits will be set free.

We are of the view that the Government is pandering to partisan pressures to the detriment of justice and to upholding the independence of the Judiciary.

Article 296(a) & (b) of the 1992 Constitution circumscribes the exercise of discretion as follows:

a) that discretionary power shall be deemed to imply a duty to be fair and candid;

b) the exercise of the discretionary power shall not be arbitrary, capricious  or biased either by resentment, prejudice or personal dislike and shall be in accordance with due process of law”

We consider the entry of the Nolle Prosequi as a gross abuse of discretion simpliciter and we call on the President H.E. Nana Addo Dankwa Akufo-Addo to demonstrate leadership and not be led by the various lawless forces within his party.

We find it very bizarre that the Hon. Attorney-General, Ms Gloria Akufo, who assured the entire citizenry of her commitment to fairness and strict adherence to ethical principles at her vetting not too long ago, will claim that she exercised the said constitutional discretion on grounds merely that there was a lack of evidence to prosecute the case in question when indeed, the Siting Judge, Court Clerks, Court Bailiffs, Court Warrant Officers (CWOs), Journalists as well as notable public figures in whose presence the said court was physically attacked and the accused persons freed, are alive and available to be interviewed and evidence taken from same.

In these circumstances, we are clear in our minds that the decision by the newly appointed AG to exercise her discretion to file a Nolle Prosequi in this matter is an abuse of discretion, it is capricious, it is an abuse of due process and it is not candid. It was obviously exercised for narrow political expediency.

Our expectations were rather these hoodlums would have been duly cited for Contempt of Court by now and successfully prosecuted.

We demand therefore that this cancerous exercise of discretion be reversed immediately and the accused re-arraigned before court without any further hesitation.

Thank you for your attention and may God bless Ghana. 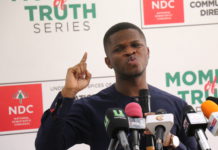