Ghana will once again attain over one-million metric tonnes of cocoa production under the Akufo-Addo led government, Acting National Chairman of the ruling New Patriotic Party (NPP), Freddie Blay has said.
According to him, the prudent measures put in place like higher producer prices and bonuses, free spraying of cocoa farms and other incentives to cocoa farmers will ensure the dream becomes a reality.
On Asempa FM’s Ekosii Sen programme Wednesday, the NPP man reiterated government commitment to add value to the cocoa we produce in the country.
He noted that, government is implementing measures to boost cocoa production to surpass the one-million-metric-tonne achievement of ex-president John Agyekum Kufuor.
The NPP said in the past that cocoa production had reduced drastically due to inefficient supply of fertilisers, chemicals, logistics, as well as the nonpayment of bonuses and incentives to farmers.
These problems, he said will be addressed to help farmers meet the new target so Ghana can return to its glory days.
This, Mr. Blay added was in line with the overall agenda of reaching the over 1.5 million metric tonne of cocoa. 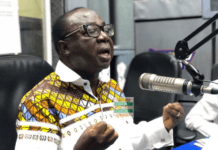