Four people have been killed in a motor accident at Abenkyim near Anwiankwanta in the Ashanti region in the early hours of Saturday.
The deceased, all males including the driver and are yet to be identified, were on board a Mazda Demio taxi cab with registration AS  9352-12.
The vehicle, said to be travelling from the Bekwai-Anwiankwanta direction of the Kumasi-Cape Coast main road skidded off the road, killing all passengers on board.
Though it is not clear when the accident occurred, police suspect the incident occurred on Saturday dawn.
Bekwai District Commander, ASP Edward Obeng Boateng who confirmed the accident to Nhyira News said police had information of the accident at about 6 a.m. and proceeded to the scene only to see the deceased trapped in the mangled vehicle.
According to him, even though the cause of the accident is not yet known, preliminary investigations suggest the speeding driver might have lost control of the vehicle whilst negotiating a curve.
Meanwhile, the bodies of the victims have been deposited at the Kotwia Seventh-Day Adventist Hospital morgue pending identification and autopsy. 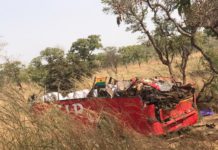