His demise comes hours after he complained of ill health and was admitted to the Kintampo Government Hospital at about 3:pm, yesterday, February 1.

He was pronounced dead one hour after.

The cause of the Chairman’s death is yet to be published by doctors.

Mr Wood’s passing was announced by former Member of Parliament for the constituency, Kwasi Etu Bonde. 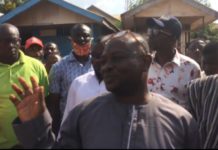