It has emerged that some military personnel involved in the recent bust of alleged coup plotters have been arrested.

According to the Minister, the arrest of the officers was part of an in-depth investigation into the attempt by a group of persons to take over the reins of government.

Some three civilians are so far in police custody for their roles in an elaborate plan to destabilise the State.

A joint security operation last Friday led to the arrest of three people and seizure of several weapons, a government statement said.

One of those arrested included a local arms manufacturer.

The government said the operation came after “15 months of surveillance and gathering of evidence on the activities of the prime suspects and others.”

Listen to the Minister in audio above: 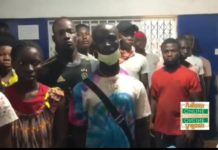