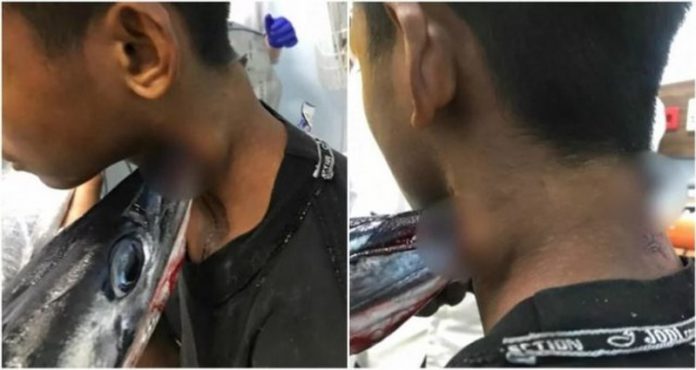 A 16-year-old Indonesian boy suffered a horrific injury to his neck after a needlefish suddenly jumped out of the water and literally pierced his neck clean through, knocking him out of the boat he was fishing from.

The freak accident occurred on January 18, when 16-year-old Muhammad Idul and his friend Sari decided to go on a late-night fishing trip.

The boys went out to sea in Buton, off the South East Sulawesi province, and everything went according to plan until Sari turned on his flashlight, which allegedly caused a needlefish to suddenly leap out of the water and lodge its pointy, long jaws in Muhammad’s neck, piercing it from his chin to the base of the skull.

Not only did the force of the attack knock him out of the boat, but the thrashing fish, which remained dodged in his neck, almost made him drown.

Muhammad somehow managed to grab a hold of the fish to prevent it from moving around and making the wound worse, rose up from the dark water and asked his friend for help.

Sari had the bright idea to stop the injured boy from trying to remove the fish, to prevent the bleeding from getting worse. The two boys swam about 500 meters to shore and sprinted to their home village in South Buton.

As soon as Muhammad’s father laid eyes on his son, with a whole fish sticking out of his neck, he knew he had to take him to the hospital.

They got in a car and rushed to a hospital in Bau-bau, about an hour-and-a-half from their village. Doctors here removed most of the needlefish so just the head remained, but they couldn’t do more because they lacked the proper tools.

To remove the sharp head of the fish, Muhammad had to travel to a provincial hospital in Makassar, the capital of South Sulawesi, where a team of five specialists needed an hour to carefully clean what remained of the fish and close his neck wound.

Five days after the surgery, Muhammad Idul was feeling much better. He still had a bandaged neck, and couldn’t move his neck to the right, but the wound didn’t hurt anymore. Incredibly, the bizarre experience didn’t affect his love for fishing.

“I just need to be more careful next time. Needlefish can’t tolerate light – that was why it jumped out of the water and stabbed me,” the 16-year-old told BBC Indonesia.