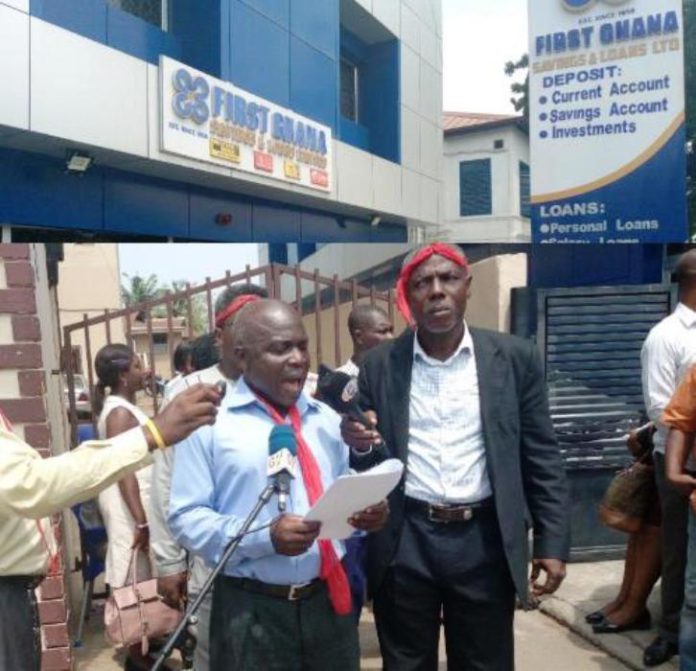 Staff of the First Ghana Savings and Loans (FGSL) Limited have appealed to government to restore the company’s license to enable it to serve its customers, including pensioners.

The Company, in which NIB has a majority stake, was among the 23 savings and loans companies and finance houses whose licenses were revoked by the Bank of Ghana (BoG) on August 16, 2019.

Mr Robert Agbadza, the Convener of the staff, at a news conference in Accra on Wednesday, said an additional capital of GH¢20 million would have saved the company.

“It is therefore preposterous for the majority shareholder (the state) at 98 per cent who failed to discharge their responsibility of recapitalizing FGSL to turn around, using another agency of the state to accuse FGSL of insolvency and revoke its license,” he added.

He said that since the National Investment Bank (NIB) took over the Board and management of FGSL, most decisions taken tended to favour NIB to the detriment of FGSL.

Before NIB acquired the majority shareholding in FGSL Limited in 2014, Mr Agbadza said the Board was controlled by the state through NIB, the Ministry of Finance and the Ministry of Water Resources, Works and Housing.

“Even the capital injected by NIB in FGSL, the fund was directly invested at uniSecurities by NIB Management with the strictest instruction to the Management of First Ghana Savings and Loans not to touch it. A challenge of such decision by the Board resulted in the then Acting Managing Director being asked to proceed on 109-day leave,” he said.

According to the convener, it was difficult to understand why the NIB stood in the way of other investors who were willing to inject more capital into FGSL if they knew they were not in the position to do so.

He said over 130 employees in the 10 branches of the company across the country had become jobless, saying, they were really in a turbulent time.

He said the government through the NIB was managing the company; therefore, it was unnecessary to create an impression that it was being managed by private individuals.

It was very painful to turn away pensioners, some of whom were at the company to withdraw their pension stipends, because the BoG had revoked the company’s license.