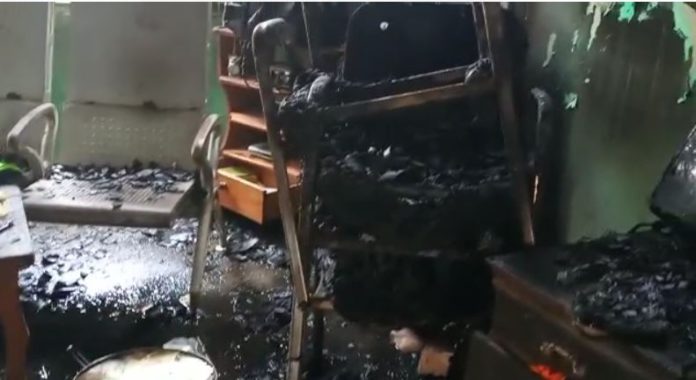 They appealed to the authorities to provide enough fire hydrants at the station to enable personnel’s respond quick to fire outbreaks.

The inferno destroyed some property in the facility on Sunday morning in the Oti Region.

The cause of the fire outbreak still remains unknown.

The fire reportedly started around 11:20 am according to an eyewitness.

Information gathered by Adom News indicated that the Nkwanta South Fire Service personnel reached the site on time to mitigate the danger.

At some point, they ran out of water due to the lack of hydrants, forcing residents to use buckets and pans to douse the fire.

The residential apartments and their auxiliary facilities were completely destroyed leaving occupants with nothing.

Speaking in an interview with Adom News’ Obrempongba Owusu, Elikplem Denyo and Moses Denyo who were occupying the apartment said, they were at church when she had a distress call that their roof that is attached to the GCB had started burning.

They reportedly rushed in and realized that the fire has completely destroyed all their belongings including an amount of over ¢5,000 in cash.

Elikplem Denyo said, the fire did not leave them with anything to cloth with and therefore called on NADMO and other benevolent for support.

Residents who helped doused the appealed to the authorities to provide enough fire hydrants at the station to enable personnel respond to outbreaks quickly.

However, the branch manager of the bank, Michael Beckly assured customers of business activities on Monday as the main office and other departments were not affected.

He commended residents for their support for dousing the fire that could have spread to other areas of the banking hall that would’ve been dangerous.