President Nana Akufo-Addo says donor support to the budgets of some ministries in 2016 is the equal to the revenue allegedly diverted by some 19 customs officials who were arrested recently.

It will be recalled that three (3) weeks ago, the country’s law enforcement agencies cracked allegedly a syndicate of 19 persons at the Tema Harbour, comprising customs officials and representatives of three clearing and freight forwarding agencies, who were allegedly responsible for the loss of some GHC1.2 billion in revenue to the state.

Referring to figures from the Ministry of Finance, President Akufo-Addo stated that the budget for the Ministry of Health in 2016 amounted to some GHC2.9 billion. Out of this amount, GHC743 million, representing 26% of the Ministry’s budget, was financed by overseas donors.

“So in three Ministries of our social sector – health, education and gender – out of a total budget of GHC9.2 billion, GHC1.2 billion is an overseas aid or donor support. And yet, one group of alleged racketeers at Tema can deny us revenue of GHC1.2 billion,” he lamented.

The President noted that with a handful of customs officials and representatives of clearing agencies allegedly responsible for this level of loss, one can, therefore, imagine the leakages and the seepages that exists in the country’s revenue collection system.

“The fight against corruption is about ourselves, it is not so a big a theoretical thing in the air. They (corrupt officials) are degrading our capacity to control our own development, and to be able to do so with our heads high and not with our hands up, begging people to come and help us. We should not be in that position,” he bemoaned.

The President continued, “We appreciate the contributions and the support that our friends across the world make to our country and to its development. We are not looking gift horses in the mouth, but we should be capable of financing our own development, so that whatever anybody else wants to come and give is like a bonus, the icing on the cake.”

These statistics, the President indicated, “tells you how important the fight against corruption is. If it is, indeed, true that the leakages (from the ports) can be anything between GHC7 billion to GHC10 billion, then you can appreciate the magnitude of where we are. Those pocketing these sums of money, and denying these monies to our exchequer, are, essentially, denying our capacity to develop.”

He assured Ghanaians that “to the extent that God gives me health and strength, I am going to do my best to make sure that the fight against corruption is won.”

Describing Ghana as a country of considerable resources, with 27 million hardworking people, President Akufo-Addo noted that “if we handle the resources of our country honestly and intelligently, there is no limit to where we can go.”

The reason why the fight against corruption is such an important matter for his government and the people of Ghana, he explained, is because of the project that we (government) have put before our people.

“We want to put Ghana in the situation ‘Beyond Aid’. We want to be able to mobilise Ghana’s own resources to handle the problems of its development. We are not a poor country in Ghana. We are a country of considerable resources, with 27 million people, hardworking people in the land which is blessed with a lot that nature has given us,” he added.

President Akufo-Addo was addressing the Ghanaian community resident in the United Kingdom, at an event held at the Central Hall, Westminster, London, on Friday, June 16, 2017, when he made these known. 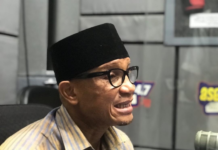