A Missouri family recently got a taste of internet stardom after sharing a series of hilariously bad “professional photograph” that they had paid just under $250 for. And the funniest thing is they consider it money well spent.
In May of last year, Dave and Pam Zaring, of Hillsboro, Missouri, were contacted by a middle-aged woman who marketed herself as an experienced professional photographer.
Having gotten married three years ago, the couple decided it was time for their first family photo shoot, so they took the so-called professional photographer up on her offer.

The couple, their two sons, Cade, 12, and Connor, 8, and Dave’s mother Sharon drove to the lovely Forest Park, in St. Louis, where they paid the photographer just under $250 to snap a few pics of them as one big happy family. 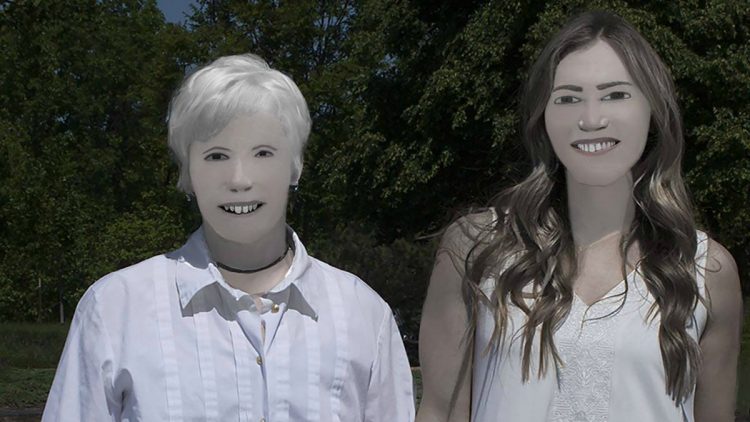 The shoot went great, and the woman said she would be in touch again in a few weeks, after editing the photos. However, weeks turned to months, and the family nearly forgot all about the pics. I guess, they figured they got scammed and moved on with their lives.
But, last week, the “professional photographer” finally reached out to Pam, telling her that she was done editing the photos and that she would be sending them by mail. On Thursday, the Zarings received a package containing a disc with the photos, but they were definitely not what they were expecting.
“I’ve never laughed this hard in my life,” Pam told local station KCEN about the first time she looked at the photos. “My kids were so confused, they thought we were playing a joke on them. They just kept saying they looked like Lego people.”

Pam claims that the photographer told her that “the shadows were really bad” on the day of the shoot, and that her photography professor never actually taught her how to re-touch photos.  She offered to redo the whole photo shoot if they weren’t happy with the results.
“I told her we were good,” Pam said, adding that she did ask for the original photos instead.
The family though that their photos were just too hilarious not to share with the world, so Pam posted them on Facebook with the caption: “Ok. This is NOT a joke. We paid a photographer, who claimed to be a professional, $2-250 for a family photo shoot.

Please see these FOR REAL photos she delivered to us….She said the shadows were really bad on the beautiful, clear, sunny day and that her professor never taught her to retouch photos. Feel free to share. I literally have not laughed this hard in YEARS!!!!!”
The photos soon went viral, and they’ve been shared over 300,000 times on Facebook alone, in less than a week. They’ve become so popular online that photography websites are actually offering tips on how people can edit their photos to look like the Zarings’.
Pam and Dave encourage people to do a bit of research before hiring a photographer, but insist that their hilariously bad photos were “worth every penny”. They brought their family joy and made them all temporary internet celebrities. That’s not bad for just $250.