The final funeral rites of the gym instructor, Stephen Akowuah, aka ‘Little’, who was gruesomely murdered, have been scheduled for September 18, 2021.

The funeral will take place in Accra with the burial to take place at Akropong in the Eastern Region.

Mr Akowuah’s family announced the date at his one-week celebration held over the weekend.

The solemn ceremony was held at the Saint John’s Grammar School field, Mile 7 in Accra.

The Abusuapanyin, Bosiako Antwi, speaking to Adom News, said no day passes without him praying God exposes the killers.

He was shot around 2:00 am by unknown gunmen with the police on a manhunt for them.

They also stormed other rooms to rob other tenants of their mobile phones and various sums of money. 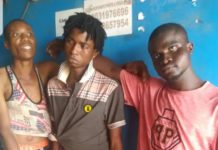 Man on the run after allegedly killing 30-year-old girlfriend