New reporting features are being rolled out, along with other changes designed to combat the spread of misinformation.

Facebook was widely criticised last month after some users complained that fake news had influenced the US presidential election.

The new features include the ability to flag fake stories, as well as possible future changes to Facebook’s algorithm.

“We believe in giving people a voice and that we cannot become arbiters of truth ourselves, so we’re approaching this problem carefully,” the company said in its announcement.

The social network has added a new option titled “it’s a fake news story” to its reporting feature, which is currently used for spam or other “annoying” content.

It is also introducing a label for “disputed” stories, which it says it will refer to third-party fact-checking organisations. 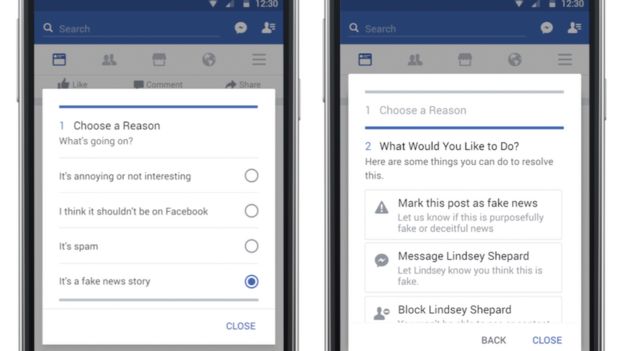 The fact-checkers must sign up to a code of principles to take part.

There are currently 43 signatories, including news organisations in several different countries. Poynter, which operates the scheme, said it was “rethinking” the application process in light of Facebook’s decision.

Facebook said stories which turned out to be fake after fact-checking would be labelled with a link explaining why, and they could also appear lower in people’s social feed.

Disputed stories will also warn users before they share a story which could be fake.

The company said it was looking at other possible future features.

One would examine if people were “significantly less likely” to share a post after actually reading the article. Facebook said it would attempt to discover if people who read a story, but then did not share it with their friends, were misled in some way.

Facebook also said it was looking into penalising websites which tried to mimic major publishers, or misled readers into thinking they were a well-known news source.