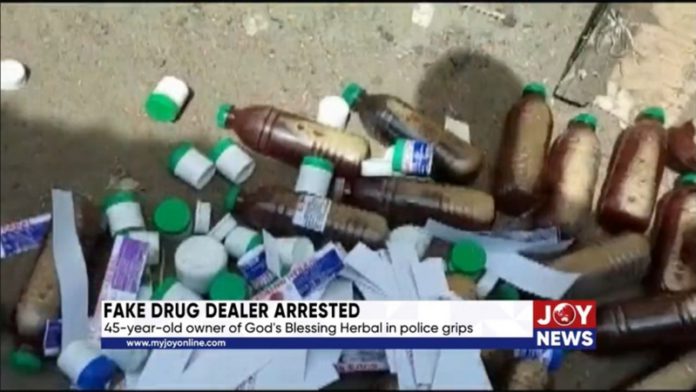 A 45-year-old man has been arrested for allegedly selling fake and unwholesome drugs to unsuspecting patrons.

The unregistered drug dealer, Emmanuel, who owns God’s Blessings Herbal, was apprehended by personnel of the Food and Drugs Authority in the Upper West office.

The Acting Regional FDA Director, Kelvin Dafari, said his outfit had a tip-off from the area where the dealer operates.

“We traced and went to the Wa Magazine and he saw us and ran away. So we mounted surveillance on him and apprehended him around 9:00 pm. Initially, he was very resistant, but we employed all our techniques and he brought us here.

“As you can see, it is a single room, he does his production and everything in this room,” the Regional Director told JoyNews’ Rafiq Salam.

Despite being in custody, the suspect was still defiant initially but admitted that his drugs have not been registered.

Meanwhile, the Acting Regional FDA Director has advised the general public to be cautious of the drugs they patronise.

“We should desist from buying drugs from peddlers,” he cautioned.

According to Rafiq Salam, the suspect was subsequently handed over to the police for further investigations.