Electronic Communications Tribunal has adjourned the case in which the Ghana Independent Broadcasters Association (GIBA) had filed an appeal at the Tribunal seeking redress for nine (9) of its members affected by the September 2017 sanctions.
It will be recalled that some 131 stations with various regulatory infractions were sanctioned by the National Communications Authority (NCA) in September with penalties ranging from fines to revocation of authorisations imposed on them.
The Electronic Communications (Rules of Procedure of the Electronic Communications Tribunal) Regulations 2016, LI 2235 states in Regulation 9 headed ‘Effect of an Appeal’  that:
(1) An appeal shall not operate as a stay of execution in respect of the decision or order appealed against except where the tribunal otherwise determines.
(2) Despite sub regulation (1), an appellant may reply to the Tribunal by motion on notice for a stay of execution of the decision or order that the appellant has appealed against.
(3) A decision or order that is the subject of an appeal shall be stayed when an application under sub regulation (2) is pending.
(4) The Authority shall stay the execution of a decision or an order where

It was based on this that the Tribunal adjourned the hearing at the request of the NCA. It is instructive to note that, the Ghana Independent Broadcasters Association (GIBA) is a voluntary association which is representing just 9 out of the 131 stations the NCA sanctioned in September.
The stay of execution thus applies to the nine appellants whose authorisations would have been revoked after a deadline. The sanctions as imposed on the rest of the stations still hold until the NCA announces otherwise.
The nine radio stations being represented by GIBA will have a stay of execution until the substantive case is heard. They are Mascott Multi-Service Limited (Atlantis Radio 87.9FM), Supermax Media Company (Max 102.9FM, Kalvice Company Limited (Kaleawo 107.3FM), Network Broadcasting Limited (Radio Gold 90.5FM), Progress Multimedia Limited (Radio Hogbe 106.5FM), Digital Broadcasting Systems Company Limited (Vision 90.9FM), Singwado Broadcasting Company (Radio Silver 92.3FM), Trickie FM Limited (Trickie 99.5FM) and Gary Express Service Limited (Beach 105.5FM).
The Authority wishes to inform the public that until the hearing is concluded, efforts will be made to ensure compliance from all Licencees and Authorisation Holders. 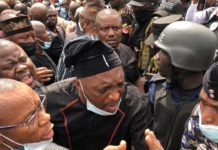