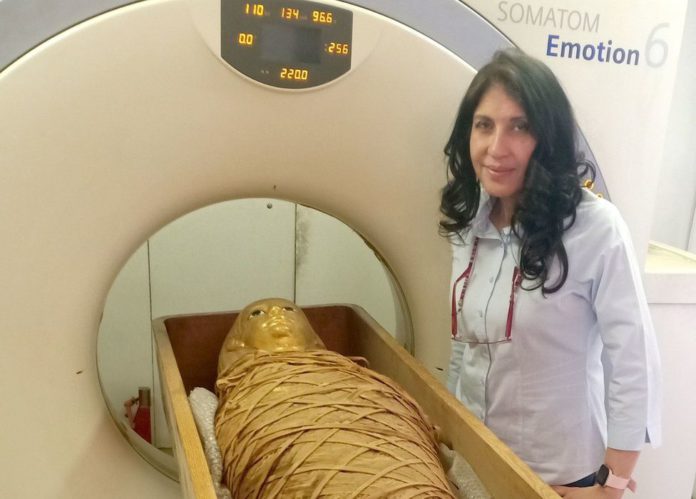 The mummified body of an ancient Egyptian pharaoh has been studied for the first time in millennia after being digitally “unwrapped”.

But archaeologists have refrained from opening it in order to preserve the exquisite face mask and bandages.

Computed tomography (CT) scans have now revealed previously unknown information about the pharaoh and his burial.

Dr Sahar Saleem, professor of radiology at Cairo University and lead author of the study published in the journal Frontiers in Medicine, said they showed Amenhotep I was about 35 years old when he died

“He was approximately 169cm (5ft 6in) tall, circumcised, and had good teeth. Within his wrappings, he wore 30 amulets and a unique golden girdle with gold beads,” she told PA Media.

“Amenhotep I seems to have physically resembled his father: he had a narrow chin, a small narrow nose, curly hair, and mildly protruding upper teeth.”

However, Dr Saleem said they did not observe any wounds or disfigurement due to disease that would allow them to give a cause of death.

The researchers were able to gain insights about the mummification and burial of Amenhotep, who was the second king of the 18th Dynasty, including that he was the first pharaoh to have his forearms folded across his chest and that, unusually, his brain was not removed.

They also concluded that his mummy was “lovingly repaired” by priests of the 21st Dynasty, which ruled about four centuries after this death.

They also showed that the priests fixed the detached head and neck to the body with a resin-treated linen band, covered a defect in the abdominal wall with a band and placed two amulets beneath, and wrapped the detached left arm to the body.

Dr Saleem said the jewellery and amulets seen in the scans disproved theories that the priests might have removed them for use by later pharaohs.

The mummy of Amenhotep I was reburied by the priests in the Deir el-Bahari Royal Cache, a complex of tombs and temples near Luxor, to keep them safe.