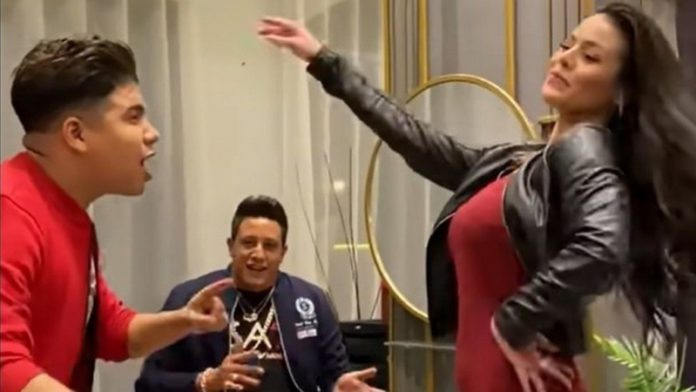 Human rights groups have criticised an Egyptian court for jailing two popular singers over a video they made with a Brazilian belly dancer.

In the clip, they are seen lip-synching and smiling as the dancer, in a long dress and jacket, performs her moves.

The video was a YouTube hit in 2020 and has clocked up millions of views.

But the court in Alexandria found the men guilty of “violating family values” in what is being seen as part of a wider crackdown on artistic expression.

They were also convicted of profiting from the video starring the dancer Lordiana, who has become well-known in Egypt for her slinky moves.

The singers – Hamo Beeka and Omar Kamal – were sentenced to a year in prison and fined 10,000 Egyptian pounds ($540; £435). If they pay the same amount on top as a fee, they can have their jail terms suspended.

Human Rights Watch says Egypt is increasingly relying on what it calls “abusive and ill-defined family values” to exert control over social media.

It is calling for cybercrime law articles that it says criminalise free expression to be repealed.

At least a dozen young women acting as social media influencers have been accused of violating the law, with courts giving them hefty fines and sentences of up to five years in jail.

The latest verdict comes as part of a larger clampdown on a relatively new genre of low-budget, electronic music known as mahraganat, or festival music, which is wildly popular in Egypt.

This is typically upbeat and lively, depicting stories from the everyday lives of less well-off Egyptians.

Some mahraganat songs have drawn international attention since being used by Egyptian director Mohamed Diab in Moon Knight, a new Marvel series.

However, the state-run Musicians’ Syndicate has banned a number of mahraganat singers, including Mr Kamal, which prevents them from legally performing in public.

Since President Abdul Fattah al-Sisi took office, the syndicate has increasingly taken on a role censuring what it considers to be morality violations.

In Mr Kamal’s case, it was pointed out that he had used words such as “alcohol” and “hashish”.

Human rights activists argue that restrictions on freedom of speech due to public morals should be proportionate, non-discriminatory and clearly defined.