The Finance Minister has said the updated figures received from the Ghana Statistical Service showed the economy was far worse than estimated in the 2017 budget.
Presenting the mid-year budget review statement on the floor of Parliament, Monday, Mr Ken Ofori-Atta quoted a number of macro-economic statistics which performed poorly than earlier reported.
Even though the 2017 budget presented on March 2, 2017, captured a 3.6% growth rate, the Minister said updated figures presented by the Statistical Service in April 2017, showed the economy grew at 3.5% of GDP.
According to him the fiscal deficit which was reported to be 8.7% at the end of December 2016, was actually 9.3% of GDP.
“Mr. Speaker, on the fiscal front, updated information shows that the end-2016 fiscal deficit was worse than previously estimated, at 9.3 percent of GDP compared to the provisional figure of 8.7 percent of GDP on cash basis at the time of presenting the 2017 Budget. The deficit on commitment basis is now at 10.9 percent of GDP up from the 10.3 percent previously reported. ”
The accumulated debt over the eight year period of the erstwhile NDC had grown by about 1,054% rising from 9.5 billion cedis in 2008 to 122 billion in 2016.
Inflation he said, was still high at 15.4% despite the projected figure of 10.1%.
Despite these challenges, the Finance Minister said the Akufo-Addo led government is undaunted and is working feverishly to ensure stability.
Under a new economic paradigm of shifting attention from taxation to production, the Minister said the policies and programmes implemented, are beginning to yield results over the last six months of the new administration.
“Mr. Speaker, we promised to stabilize the economy in a sustainable manner, while accelerating growth and creating prosperity and jobs for all. The macro-fiscal performance we have achieved in the first six months of President Akufo-Addo’s administration is showing remarkable progress. The major macroeconomic indicators are now trending in the right direction indicating that the economy is on track.”
He said the fiscal deficit, interest rates are beginning to point downwards due to the sound economic management of the economy.
While he admitted a fall in revenue targets, he was quick to add that expenditure levels have also been reduced accordingly.
This, he said is to ensure stability but was quick to add that measures have been taken at the country’s ports to ensure that corrupt activities are nipped in the bud in order to shore up the revenue receipt. 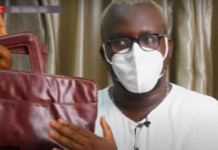