The immediate past Acting CEO of Korle Bu Teaching Hospital has accused the Health Ministry of refusing to construct a new emergency centre to fix the ‘no bed syndrome’ at the facility.

Dr Felix Anyaah said officials at the Ministry are sabotaging a $55 million project in which the facility would benefit from 20,000 beds so as to line their pockets.

He said the project which was secured over five years ago was not prioritized by Health Ministry.

Speaking to Raymond Acquah on Upfront the JOYNEWS channel Wednesday, he revealed that all attempts to get the Ministry to urgently release funds for the project has failed while people die needlessly.

“Tuesday was the second day I shed tears because some people paid with their lives for small things we have failed to fix as a country.

“When Joy News reported the death of a 70-year-old man who died because he did not get a bed after going around seven hospitals in the capital, I was upset,” he said.

Dr Anyaah who was among the list of CEOs who were relieved of their duties by the President last Wednesday said it is sad those in authority have looked on for such a mess to happen in the sector.

READ: Jamie Foxx accused of slapping woman with his penis

The owner of Holy Trinity Hospital and Spa in surprised decision makers only look out for their selfish interest when donors are willing to push money into the hospital to save lives.

He cited a document from the Foreign Affairs Ministry warning the Health Ministry of unjustifiably withdrawing from a Kuwait government donation funds.

The Saudi Kuwait government donated over $55 million to build a modern-day Accident and Emergency Centre for KBTH but Dr Anyaah claims some people at the Health Ministry are drawing from the account.

“For almost six years, people are sitting down chopping from this account…” he said adding the policy on projects at the KBTH has to be looked at.

According to him, it is archaic for government to concentrate on auditing financials to the neglect of operations.

He said one of the key things he focused on during his tenure was answering questions about the number of people on a particular project as well as how a project must be executed.

Dr Anyaah said although he was kicked out, he is proud of the laying the foundation blocks.

During his administration, he who was voted the overall best CEO (private/public sector) in 2017, got the hospital a new executive wing which contained an invitro fertilization centre as well as DNA and general lab services.

His dismissal generated a wave of agitations among some workers of KBTH who registered their displeasure with the decision.

“He is a loving CEO and unlike others, we have had in the past, Dr Anyaa has the interest of the hospital at heart and is not looting our coffers like some of his predecessors,” one of them said. 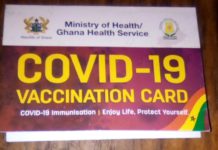