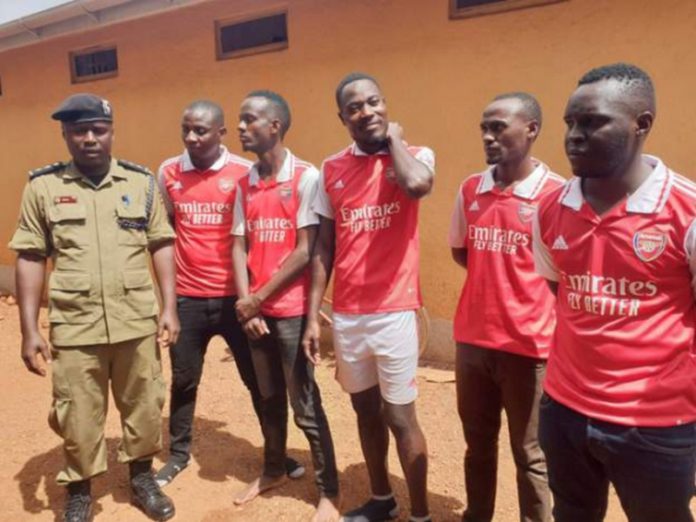 Some eight Arsenal fans who were arrested in the Ugandan city of Jinja after celebrating the club’s win against Manchester United in the English Premier League have been released.

They were wearing the club’s red jersey and carrying a symbolic trophy during their arrest on Monday.

Police said they didn’t have a permit to hold the procession which is a public order offence.

But on Tuesday a joint security team agreed to free them with a caution, said James Mubi, the regional police spokesman.

One of the fans told journalists that they would “seek for permission [to celebrate] if Arsenal wins the premier league”.

“We shall have the celebrations in Bugembe stadium,” the self-proclaimed ambassador of Arsenal in Uganda added.

The police spokesman claimed the fans did not know the basics about the club – that they didn’t know which year Arsenal had their unbeaten run and had named a former Ugandan goalkeeper as an Arsenal player.

Police in Jinja have released Arsenal fans who were arrested on Monday after 24 hours of detention
The Fans were accused of carrying an illegal procession on different streets of Jinja
Kiira region @PoliceUg spokesperson James Mubi says Police leadership agreed to release them pic.twitter.com/OtZuivJqbo

The ⁦@Arsenal⁩ fans we arrested even had no basics about the club. – James Mubi, Kiira regional ⁦@PoliceUg⁩ spokesperson #NBSportUpdates pic.twitter.com/3vswH1QRw6