The Youth Wing of the National Democratic Congress (NDC) has given the Electoral Commission (EC) by tomorrow to declare John Dramani Mahama President-elect or face their wrath.

The Youth Wing, following a meeting with all Regional Youth Organisers, came to the conclusion that the party won both presidential and parliamentary elections, but the EC says otherwise.

The contested Techiman South, Sefwi Wiaso and Sene West seats, they said in a press conference, should be declared for the NDC.

Failure on the part of EC to do so, they warned, will lead to positive defiance. 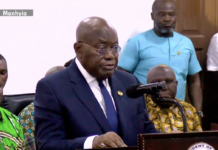 NDC Youth Wing writes to Akufo-Addo; asks him to resign