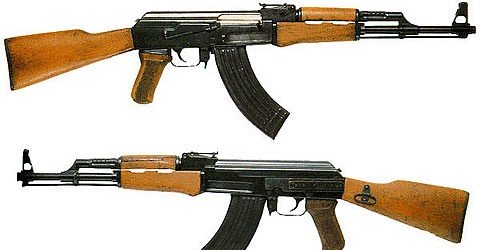 The Customs Division of the Ghana Revenue Authority (GRA) has refuted claims by media publications that a container load of sophisticated guns including AK 47 assault rifles have arrived at the Tema Port.

Together with other security agencies, they are assuring the public that no such weapons have been imported into the country and that the security agencies would ensure that no illegal goods passed through Ghana’s ports of entry.

This was made known on Friday at the Old State Warehouse, Tema Main Harbour, after Customs and other security agencies and the press inspected the alleged container to determine whether it indeed contained those weapons as was speculated.

Briefing the media after the inspection, the Head of Preventive of the Customs Division of the GRA, Joseph Oppong Aboagye, indicated that, “Examinations have been carried out by the entire security operatives at the Port; it stared at 09 50 am and closed around 13 20 hours GMT.”

He indicated that the items found in the container were identified and were as presented in the documents.

He said based on this finding, the consignment was legally imported which meant that the news circulating on social media was false.

He explained that  sophisticated weapons were  permitted in the country only through official channels by the military and other security services “but when we went through them none of the alleged weapons were found among them.”

He indicated that the importer of the said goods was licensed with the requisite permit and documents needed to operate as an arms dealer and that all the relevant taxes had been paid.

Mr. Aboagye said that on May 9, at 10 00 hours, they intercepted a truck with registration number GT 9699 Y with container number MRKU 0275418 which was scanned and analysed by one Michael Aziawa of Scanco and audited by Alex Kese.

The customs officer said, “When we intercepted this consignment, we thought we wanted the right thing to be done, so after scanning, the images presented weren’t clear, so in such cases, we have every right to re-examine them to establish the genuineness or otherwise.”

He informed that as such, the containers were put under tight security to be re-examined the next day by all security agencies concerned.

He informed that somehow some people got the information and decided to spread the wrong impression that it was sophisticated arms that had arrived at the port.

“We want to inform the public that the security services at the Port are at Third Degree Alert, and that there was no cause for alarm, and that the public should disabuse their minds of any thoughts of insecurity,” Mr. Aboagye said.