Mr Ashon Cudjiw former President of the Travel Writers Association of Ghana (TWAG), has appealed to the Chief Justice to create a different court for the Special Prosecutor to ensure speedy adjudication of cases it will investigate for trials.

He said the usual routine law courts are over burdened with cases and total reliance on them will bring fatigue on both the prosecution and the judges.

READ: Photos: Woman sleeps with son to have a child for her impotent husband

Mr Ashon Cudjiw who is also a veteran journalist and a former Deputy News Editor at the Ghana News Agency said these at a forum at Kasoa on Thursday.

He observed that some cases in the traditional law courts sometimes takes a long time for trial to complete and day in day out more cases keep adding up to the numbers.

In this regard, he said, a special court for the Special Prosecutor will be an advantage to the Office and also benefit those who will be haul before that court.

Mr Ashon Cudjiw said when his suggestions are taken it will be in the interest of the nation. 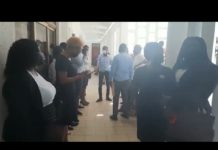