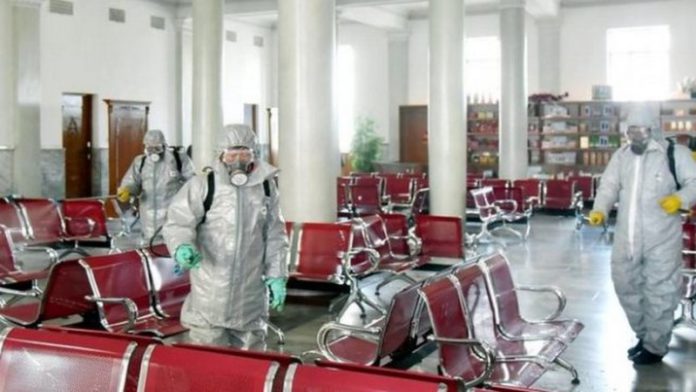 As the number of coronavirus cases in South Korea keeps on rising, attention is turning to how its impoverished neighbour might cope with an outbreak of its own.

North Korea is seen as highly vulnerable to infectious diseases, and its healthcare system ill-equipped to deal with them.

So far, the country claims to have no cases of Covid-19 – but some observers are questioning whether that can be true.

Experts say an outbreak in North Korea would be devastating for a population already suffering from malnourishment and poor health.

What are North Koreans hearing about the virus?

North Korea has been unusually upfront about the need to prevent the virus spreading, describing it as a matter of “national survival” and urging “revolutionary” measures.

State media and officials have repeatedly stressed there are no cases in the country – while warning they should not let their guard down.

Information is being pumped out almost on a daily basis on the “high-intensity” steps taken to prevent coronavirus – as well as the need to practise responsible hygiene.

Images have been broadcast of workers in protective suits disinfecting public spaces and health workers educating the public on symptoms of the disease.

Premier Kim Jae Ryong has been pictured wearing a face mask while guiding “anti-epidemic” efforts. There has also been heavy coverage of the spread of Covid-19 in China and internationally.

State-run Korean Central Television (KCTV), too, has featured daily broadcasts on the efforts to prevent an outbreak, even running special a programme: “Let us completely block the novel coronavirus”.

North Korean media have also been pushing out unverified claims of medicines. Propaganda website Sogwang reported that burdock is a cure for the coronavirus, while promoting a medicine made with it.

What healthcare does North Korea have?

North Korea claims its public health system is world class. But international experts say it is appalling, with some hospitals even lacking electricity and running water.

Outside of Pyongyang, there are no medical facilities to speak of, and there have been concerns that virus cases may be going undetected in rural areas.

On paper, North Korea provides free universal healthcare to its people at government-operated centres, but the system is said to favour the elite.

In NK News’ “Ask a North Korean” feature, defector Tae-il Shim said that citizens had better treatment in the 1970s and 1980s under Kim Il-sung, the nation’s founder.

“North Korean unpreparedness to deal with a pandemic could undermine regime rule and create internal instability,” said Kevin Shepard, a defence policy analyst, in an article on NK News.

In 2019, North Korea was ranked amongst the worst in the world in terms of preparedness for a disease outbreak, according to the Global Health Security Index published by US-based Johns Hopkins University.

Doubts have also been raised about North Korea’s ability to test for the virus – even though state media has reported on factories producing test-kits, facial masks and disinfectants.

What measures has North Korea taken?

North Korea has declared the threat of coronavirus a “national emergency” and taken drastic steps.

It was among the first countries to close off its border with China, and has temporarily barred all foreign tourism. It has also suspended flights and railway services from China and Russia.

North Korea has also expanded quarantine of foreigners from 15 days to 30 days, and even imposed restrictions on aid workers and international health agencies.

Recently, North Korea has also rejected the UK’s request to rescue Britons being held in quarantine inside the country.

It has tightened customs-related quarantine measures, and all goods arriving at North Korean ports or passing through border bridges are kept in isolated areas for 10 days.

North Korea has also reportedly made cremation mandatory for dead people (as opposed to burial). It has restricted public gatherings and reportedly closed schools throughout the country for a month.

The government has even sent aid and medical supplies to China – an unusual move given that aid often flows the other way around.

What impact is the virus having?

North Korea relies heavily on trade with China – which accounts for almost 90% of all foreign trade – so a border shutdown will hit the economy hard in the short-run.

North Korea’s network of smugglers and traders that operate along the border will feel the impact, as will the private markets that have flourished under Kim Jong-un.

Further, North Korea’s plans to earn hard currency via foreign tourism – which is not subject to international sanctions – seem to have been derailed, and the Pyongyang Marathon was cancelled.

Besides the economy, North Korea’s diplomatic work has also been put “on hold“.

Quarantine measures have left foreign embassies in Pyongyang unable to properly perform their duties, Russia’s ambassador to the DPRK was quoted as saying in an article for Russia’s TASS news agency.

Some outlets have suggested that fears of the virus may also have prompted North Korean leader Kim Jong-un to reduce his public appearances and cancel military parades.

Chinese tourists in Pyongyang in April 2019 – before the outbreak

How did North Korea deal with past health crises?

North Korea’s responses to the Ebola outbreak in 2014 and Sars in early 2000s were far more restrained than for Covid-19.

North Korea’s announcement of the Ebola outbreak in 2014 came quite late, some eight months after the disease took hold in West Africa.

It barred foreign tourism and banned North Koreans from going abroad, according to an article in US-based 38North website. It also put foreign nationals under medical observation for 21 days.

North Korea did not close the border entirely during the Sars outbreak, and banned travel from only certain places where the infection had spread.

Flights to Beijing were suspended for a month, and entrants to North Korea required a special approval. It also quarantined people coming from Sars-affected countries for 10 days.

North Korea did not report any case of 2009 H1N1 flu outbreak initially – but months later reported that nine patients had been diagnosed with the disease.

“North Korea’s handling of the coronavirus is unusually high-profile compared to past epidemics and reflects regime concern about the issue,” Minyoung Lee, a senior analyst with NK News, said.