Dozens of children are among those killed in devastating mudslides in south-west Colombia, according to President Juan Manuel Santos.

The total death toll has surpassed 200, with hundreds also injured.

Heavy rain flooded the town of Mocoa in the country’s south-west, with mud and rocks burying whole neighbourhoods and forcing residents to flee their homes.

More than 1,000 soldiers and police are involved in the relief effort in Putumayo province.

“Until we have the last person identified we are not going to stop,” said President Santos, who flew to the area on Saturday after the landslide struck.

The relief efforts continued throughout the weekend.

He said the current death toll was 207, out of which 170 had been identified, including 44 children.

The army had previously reported 200 people missing, but the president tweeted on Sunday afternoon that there were officially no disappeared persons.

Earlier in the day, video footage from Mocoa showed residents crying over a list of missing children, with their names and aged pinned to a board.

“We have lost a baby, who has gone missing,” one resident told reporters. “A little baby, we can’t find him anywhere.” Another woman told reporters she was desperately seeking her two daughters and one young granddaughter.

“Whether they are dead or alive, I just want to see them,” she said through tears.

The exact death toll is hard to confirm with the rescue operation still under way.

Some local media estimate up to 300 people have been killed, while the Colombian Red Cross has a total hovering above 200.

The Red Cross said it was working to help family members contact each other, and the Colombian Air Force has brought supplies.

President Santos has vowed investment will be made to make Mocoa better than it was before.

His critics said more should have been done to protect the area from such disasters.

The landslide struck in the early hours of Saturday morning, when many people were asleep in bed.

Colombia’s director of the National Disaster Risk Management Unit told the AFP news agency that a third of the region’s expected monthly rain fell during one night.

Although rainfall is abundant in the area, this downpour was unusually heavy and caused rivers to burst their banks.

The overflow then picked up mud and debris, creating a cascade.

Video footage of the aftermath showed currents so strong that abandoned lorries were propelled through the flooded streets.

A senior UN official in Colombia, Martin Santiago, blamed climate change, saying it had caused “tremendous results in terms of intensity, frequency and magnitude of these natural effects” in the region.

Others said deforestation has also played a role. “When the basins are deforested, they break down. It is as if we remove the protection for avoiding landslides,” said Adriana Soto, a Colombian conservationist and former environment minister.

With no running water in Mocoa, one resident told El Tiempo newspaper that they had been collecting rainwater. Power lines are also out across the area.

Photos posted to social media by the air force showed some patients being evacuated by air.

Local resident Mario Usale, 42, told Reuters he was searching for his father-in-law.

“My mother-in-law was also missing, but we found her alive 2km (1.25 miles) away. She has head injuries, but she was conscious,” he said.

Landslides have struck the region several times in recent months.

In November, nine people died in the town of El Tambo, about 140km (90 miles) from Mocoa, during a landslide that followed heavy rain.

Less than a month before that, another landslide killed several people near Medellin, almost 500km (300 miles) to the north.

And in neighbouring Peru, more than 90 people have died since the start of the year because of unusually heavy rainfall, which also caused landslides and flash floods. 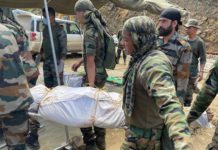 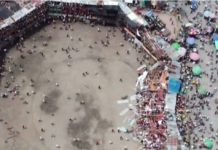 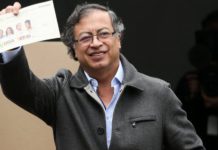 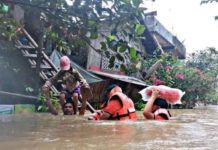 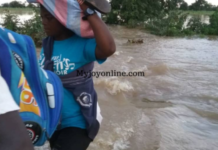 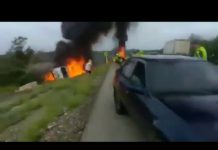