Mohammed Ahmed Polo, Former player for the Black Stars has said coach James Akwasi Appiah, is the right person for the vacant head coach job of the Black Stars.

Speaking to the GNA Sports, Coach Ahmed Polo, said the former Black Stars coach was fit for the job and must be reappointed by the Ghana football Association (GFA).

“I think Akwasi Appiah is the right local coach for the Black Stars, if you compare him to those we have in the system now. He has been there before, he is tried and tested, we all saw what he did for the team and I am confident that his second coming will be better.

“He will have to assess himself to know what he did wrong earlier, why people are saying he could not manage the egos of the stars. If there was a problem, he should be able to find an antidote to that problem.

“I do not believe that he can’t control the players, there was a problem which was bigger than him and we all saw what happened in Brazil 2014. I think he was not given the chance to put his feet down and take right decisions and I am sure if he returns it will be different.

“Some other local coaches have had opportunities with the Black Stars, like Sellas Tetteh and Maxwell Konadu, but Akwasi Appiah lived up to the expectation. He left an obvious mark on the team and that is why I am saying he is the right local coach for the job.

“I am a local coach but to some extent I will say Akwasi appear deserves it better than I do, he has proven beyond reasonable doubt, so it is only appropriate to appoint him to lead the Black Stars. I don’t even think other local suitors were able to apply for the job” Ahmed Polo said.

James Akwasi Appiah was shown the exit from the Black Stars in 2014, after a disappointing world cup performance in Brazil. 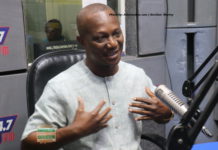