The country accounted for more than a million submissions, according to an annual report by the World Intellectual Property Organization (Wipo). It said the figure was “extraordinary”.

Many of the filings were for innovations in telecoms, computing, semiconductors and medical tech.

Beijing had urged companies to boost the number of such applications.

But some experts have cast doubt as to whether it signifies that the country is truly more inventive than others, since most of China’s filings were done locally.

A patent is the monopoly property right granted by a government to the owner of an invention.

This allows the creator and subsequent owners to prevent others from making, using, offering for sale or importing their invention into the country for a limited time.

In return they must agree for the patent filing to be publicly disclosed.

A total of 2.9 million patent applications were filed worldwide in 2015, according to Wipo, marking a 7.8% rise on the previous year.

China can lay claim to driving most of that growth. Its domestic patent office – the Property Office of the People’s Republic of China (Sipo) – received a record 1,101,864 filings.

That was more than its Japanese, South Korean and US equivalents combined.

According to Wipo, they filed just 42,154 applications outside their borders – Huawei and ZTE, two smartphone and telecoms equipment-makers, led the way. 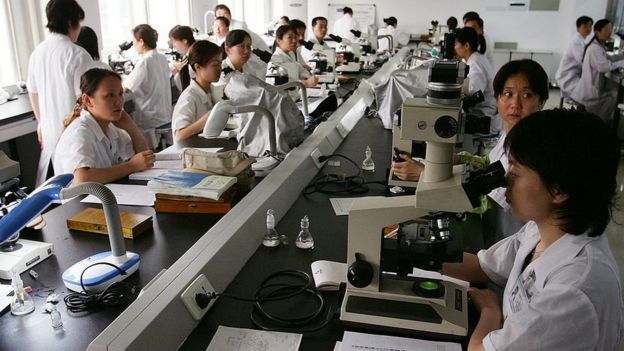 One patent expert, who works with Chinese firms but asked not to be named, said the disparity in the figures was telling.

“What’s called a patent in China is often a species of design, and these are the things they are getting copious amounts of,” he said.

“This is probably innovation at its thinnest. I’ve seen some of these things and they are typically around parts of machinery on production lines.

“The detail of what they are applying for means they would be unlikely to have the necessary degree of novelty to be granted a patent worldwide.”

In Europe, creating a new look for a manufactured object is not enough to qualify it for a patent – there must also be a technical aspect featuring a new process, improvement or concept that would not be obvious to a skilled person in the field.

In China, however, creating a distinctive new design – based on an object’s shape, pattern and/or colour – is sufficient, so long as the product can be sold or used independently of other parts. The US also affords similar patent rights.

Part of the reason so many applications were made locally was that China set itself a target to boost patent filings five years ago.

Sipo declared at the time that it wanted to receive two million filings in 2015.

The government supported the initiative with various subsidies and other incentives.

As such, its tally of just over one million applications in a single year may be a world first for any patent office, but it was still well short of its goal.