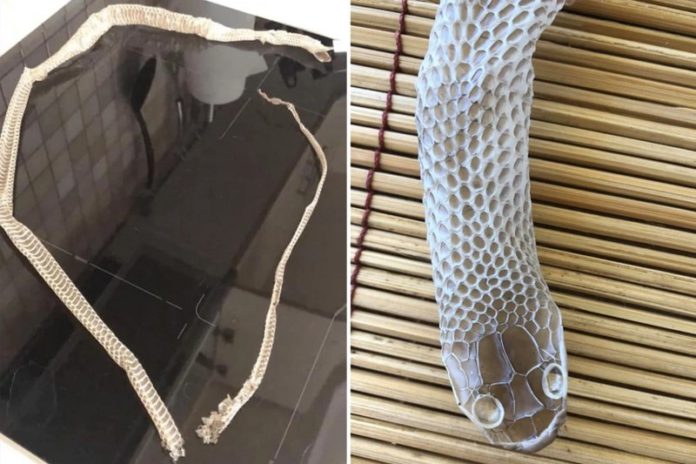 A woman has shared photos of the chilling moment she discovered a “creepy” three ft snake skin in her garden.

Belinda Kane, from Northern Rivers, Australia, says the owner of the scaley peel was nowhere to be found.

She posted snaps of the lengthy transparent skin to an Australian Native Animals Facebook group on Wednesday in the hopes she could find out who had been stopping by her home.

She wrote: “It seems I’ve had a visitor overnight but they left their jacket behind. Any ideas?”

The photos showed incredible detail of the snake’s entire body including its eyes.

Social media users were quick to realise that the snake’s tail skin was missing – so after another search of the garden, Belinda found the thin skeleton-like tail.

Soon a member of the Facebook group with knowledge of snakes was able to identify that it had come from a common tree snake.

They wrote: “The identifying characteristics for this shed was the middle head scale (very long and slender shape, the row of hexagonal-shaped dorsal scales along the shed and the tail end helped determine that it’s from a common tree snake.”

Common tree snakes and long, slender, large-eyed, non-venomous snakes which are native to the area.

After the mystery was solved, social media users were still in awe of the fact that the skin was so intact.

One person wrote: “Wow! That is fantastic! What an amazing thing to have at your home.”

While a third said: “Wow, what a great skin, so intact still.”

Earlier this week a six-year-old died after being bitten by a snake in the bathroom of her family home in Saudi Arabia.

Little Tamara Abdul Rahman was rushed to the Asir Central Hospital in the city of Abha but could not be saved.

Even though her condition was stable at first, she was later moved to intensive care, where she was pronounced dead shortly afterwards.