In 1980, Portugal was shocked by the story of Maria Isabel Quaresma Dos Santos, a 9-year-old girl who had spent her entire childhood in a chicken coop, deprived of any human interaction and affection. Because of the effects growing up with chickens had on her behaviour, Isabel became known as “Chicken Girl”.

According to an article published by the Diário de Notícias newspapers in 1980, Maria Isabel Quaresma Dos Santos was born on July 6, 1970, on a farm in Tábua, in Portugal’s district of Coimbra. When she was only one year old, her mother, who doctors would later diagnose with severe mental problems, locked her away in the chicken coop, because she didn’t consider her as part of the family. Maria Isabel would spend the next 8 years of her life in this place, surrounded only by chickens and surviving on the same food as the birds – grains, cabbage leaves and whatever leftovers the family would feed them.

Interestingly, Maria Isabel’s older brothers did not share her fate. They lived normal lives, slept in the family home, went to school and interacted with other children from the local community. It was later revealed that everyone in Tábua knew about the girl growing up in the Dos Santos’ chicken coop, but no one ever denounced the family to the authorities or try to help her in any way. Tábua was a small rural community in those times, and people focused on working in the fields instead of getting mixed up in the affairs of their neighbours.

Although the story of the “Chicken Girl” – as newspapers referred to Isabel at the time – only broke out in January of 1980, the girl had an opportunity to escape her inhuman prison four years before. In 1976, one of her aunts filed a complaint against her parents and tried to get her examined by doctors. She was diagnosed with a severe disability by doctors in Coimbra, who added that she needed to be hospitalized for rehabilitation. However, there were no institutions that would take her in, so after being rejected by several hospitals and mental facilities, the aunt had no choice but to take her back to her family.

It wasn’t until 1980, when Maria Bichão, a radiology technician at Torres Vedras Hospital, exposed the girl’s case to the media that things actually started moving in the right direction. Bichão had been made aware of Maria Isabel’s situation by other nurses at the hospital and wanted to help. She took the girl to her home for 15 days but soon realized that she needed professional help, so she contacted journalists from the Portuguese capital about the conditions she had been living in and the effects this had had on her physical and mental state, hoping to raise awareness about her case.

“It’s hard to imagine that anyone can survive in the conditions that this child has lived in for years. But even more shocking is that her case had been denounced four years ago without any institution taking the necessary steps to resolve it,” wrote Maria Catarina, a journalist from Lisbon.

Manuela Eanes, Portugal’s First Lady at the time, played a big part in this story, arranging for Isabel to be taken to a rehabilitation centre in Lisbon. Doctors there were shocked by her animal-like behaviour and severe mental disability.

“From what I have observed so far, I can say that this is a child suffering from an intellectual insufficiency most likely caused by affective and social abandonment. Isabel’s behaviour is at an elementary biological level, that is, primary reactions of an animal or human being,” João dos Santos, director of the Center for Child Mental Hygiene in Lisbon, told the” O Jornal ” newspaper in February 1980.

Portuguese newspaper Expresso reported that despite being “profoundly sad” and afraid, Maria Isabel couldn’t even cry, because “crying is the first form of communication between human beings” and she had had almost no contact with humans during most of her childhood.

Even more shocking were the reports about the way Maria Isabel mimicked chicken behavior. She took small steps and constantly moved her arms, as if they were wings. She did not speak and only emitted cackles to express herself. Because she had only been fed chicken food, the girl exhibited severe growth problems, and despite being ten years old, her brain had stagnated to the level of a two year old’s. 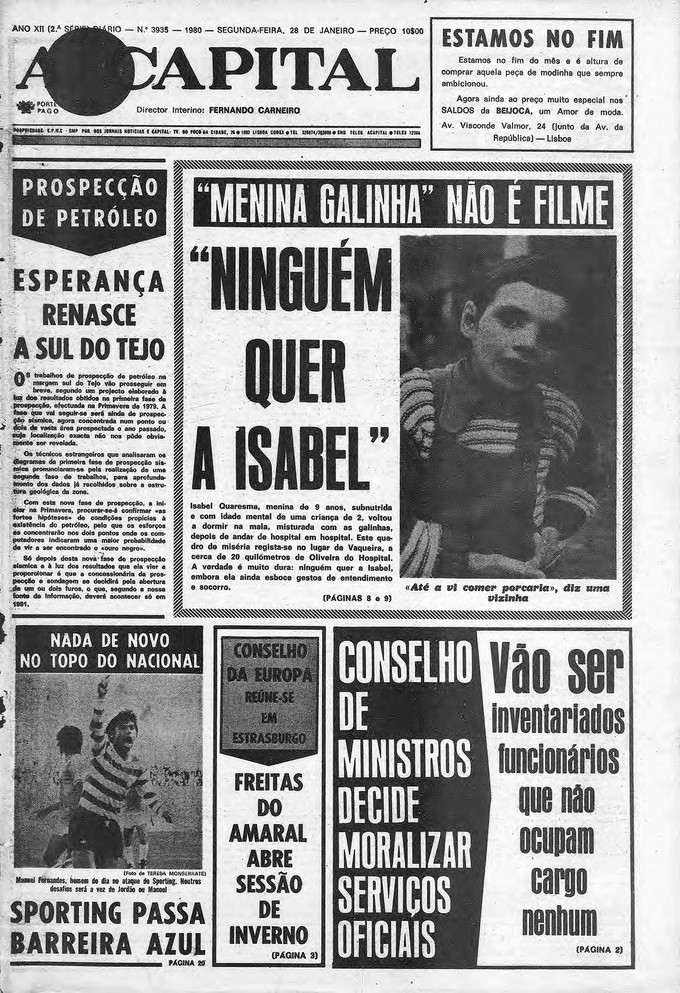 Even a decade later, Maria Isabel Quaresma Dos Santos still exhibited gestures and behaviour characteristic of the place she had grown up in. She moved with small, quick steps and flapping her arms remained one of the main ways she expressed herself. At age 27, she was able to move by herself on flat surfaces and had become less aggressive.

“Despite not speaking, she is very intelligent, independent, and has adapted very well to her environment. She knows how to show what she wants and what she does not want,” Cristina Conceição, a psychologist working with Maria Isabel, told Expresso in 2002.

Maria Isabel Quaresma Dos Santos has been living in a medical facility in Fatima for the last 16 years, and without revealing too many details, to preserve “the dignity of the patient”, the Expresso newspaper reports that she is “well”. Isabel recently turned 48-years-old.

The story of Portugal’s Chicken Girl has been retold for nearly four decades, but earlier this year, an investigation by the Expresso revealed that the newspapers of the 1980s may have exaggerated their reporting. It was true that Maria Isabel had been living in a chicken coop, but only because her mother, who had suffered brain damage due to meningitis, would leave her there unattended while working in the fields. However, neighbours say that there were no chickens, as the family was very poor.

Isabel’s chicken mimicking was apparently all made up by the newspapers to sell more copies. She did indeed suffer from severe mental deficiencies due to lack of human contact and affection, but her behaviour apparently had nothing to do with imitating birds, it was just how she expressed herself.

Caretakers at the institution Isabel has been living in for the last 22 years have always been very protective of her, refusing to let anyone photograph her, and even denying requests from Portuguese and foreign scientists wanting to study her. She apparently has the cognitive level of a 4-year-old.