Funny face recent marital issue has exposed the sex life of most men…in reality; most men are in the normal range of 2 to 10 minutes. I want you to understand that men who go beyond this range are either on drugs et al. The most challenging issue we need to asses as men is marrying a woman who has slept with more than four men and these days it is difficult to get. Such women have experience with lots of men and are very difficult to satisfy sexually and this is where the problem emanates. Today, most of our ladies are using sex machines and no man on this earth can satisfy a lady who uses machine.

Ladies are putting a lot of sexual pressures on the men. The men in other to save their relationships turn to all sorts of unnatural sexual help. Alcoholic marketers use this as the bedrock to promote their brands and men are falling prey to this. The body is use to natural things and anything unnatural the body tends to fight.

The Men are using all kinds of concoctions just to satisfy the ladies in bed creating diverse medical conditions. It is therefore prudent that as men we have to assess the sexual behaviors of the ladies before we marry and I think counsellors should also include this as part of their counselling programs. They need to assess previous sexual lives of both partners, number of ex of the couples for good sexual counselling.

Now let’s analyze these very important questions:
It is alleged that funny face ex accused him as a two minutes man in bed. But should sex last 5 minutes or two hours? Should time even be a measurement of success in the bedroom to prove that you are a man? No matter the answer, most people take note of how long they last in bed — and given these private (or public) musings, there are plenty of “misunderstandings and expectations that are just not based on facts and science,” says John Wincze, clinical professor in psychiatry and human behavior at Brown University. So what’s the truth of the matter? Here, with help from Wincze, are just the facts.

Most men last from 1 to 10 minutes

Sex therapists think 7 to 13 minutes is the sweet spot

For a finer understanding of general expectations, Penn State researchers surveyed 50 American and Canadian sex therapists in 2010 about what timing the experts thought was best. The therapists said that three to seven minutes was “adequate” and seven to 13 was “desirable.” They said one to two minutes was likely too short for most people, but that 10 to 30 minutes was probably too long.

Recently, an app that measures sexual activity released data that revealed how long users in different states seemed to be lasting. According to a story by Nerve, the Spreadsheets app recorded average durations that lasted from 1:21 (Alaska) to 7:01 (New Mexico). This app does not account for foreplay.

Wincze says there are many different medical explanations for what qualifies as premature ejaculation but, in general, it’s ejaculation that occurs less than one minute after penetration. He has also treated men who orgasm before sex even starts. “There are some males who are so premature, that even a partner touching them, they ejaculate,” says Wincze. This is a rare situation and often requires medication.
So In this case 2 minutes for funny face is normal and most men are in this range.

Research has shown that women want more foreplay and afterplay. A recent survey from the Journal of Sex and Marital Therapy of 5,655 Japanese women found they desired more action on either end of the main event than they currently experienced. There are biological reasons for this. It takes women time to lubricate and for their erectile tissues to engorge. Because women generally react to stimulation differently than men — men can usually get more turned on by just visuals— their arousal process tends to take longer to really get going. It’s also important to know that, as women become aroused, their vagina lengthens on the inside, which is why rushing through things can actually be painful.

“Ejaculation Is Largely a Neurobiological Event”

Even if you don’t fit the classification of premature ejaculation, you might be unsatisfied with your timing. In that case, consider speaking with a specialist in male sexual health or a sex therapist. But there’s a catch. “The reality is that ejaculation is largely a neurobiological event,” says Wincze. “It’s something that is more hard-wired, something that is controlled more by a person’s physiology, than anything they are specifically doing to control it.” What’s more likely to happen if you seek expertise for your dissatisfaction is that the experts will remind you that there is a lot more to enjoying sex than wanting it to be a marathon.

One Way to Last Longer? Be More Adventurous

There is at least one evidence-based approach to fostering lengthier sex that also follows the enjoyment-first philosophy. A 2011 survey published in the Journal of Sex Research reached out to 8,656 Australians ages 16 to 64 about their most recent sexual encounters. They found that people who reported sexual activity that included acts beyond the basics, such as oral and masturbation, also reported longer sex sessions than people who had mainly vaginal sex. Age was not a factor. This is actually telling you, with science, that being more adventurous in your sex life can make you last longer. Wincze is in complete agreement with this idea. “The more flexibility a couple builds into their sexual experience, the better off they’ll be,” he says. Advice doesn’t get much better than that

So please laugh not funny face. .he is a man. Ladies from the research two minutes are what you are likely to get from most men and it is normal for a man to climax at two minute. The abnormal one is less than 60 seconds…This is where there is a need for concern. Stay blessed. 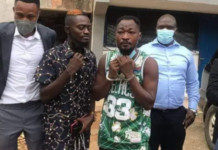